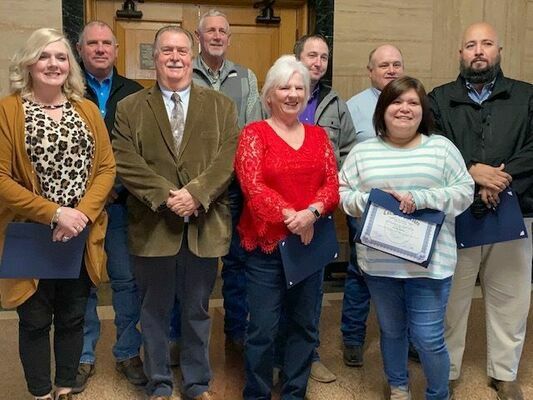 Service awards
Members of the Cherokee County Commissioners’ Court recognized county employees for their years of dedicated service during a Jan. 11 meeting in Rusk. Photo by John Hawkins

RUSK – Several Cherokee County employees were recognized during a Jan. 11 Commissioners’ Court meeting for their years of service to the county and her residents.

Also during the meeting, the court:

• Approved the Sheriff Department’s monthly report for December 2022. During that period, CCSO received 2,849 calls, of which 1,277 were 9-1-1 calls, 47 alarm calls and 33 fire calls. Prisoner intake numbered 151, while prisoner release for December tallied 144. A total of 113 animal control calls/complaints were made, and a total of 205 total offense cases were reported for incidents such as burglary of a vehicle, theft and assault/family violence.

• Approved a memorandum of understanding between Immigration and Customs

• Approved a consent agenda comprised of an approval of final plat creating Lots 1-27 of Jacket Village; monthly reports from treasurer, auditor and Pct. 2 constable; meeting minutes; and authorizing payment of bills, payroll and transfer of funds