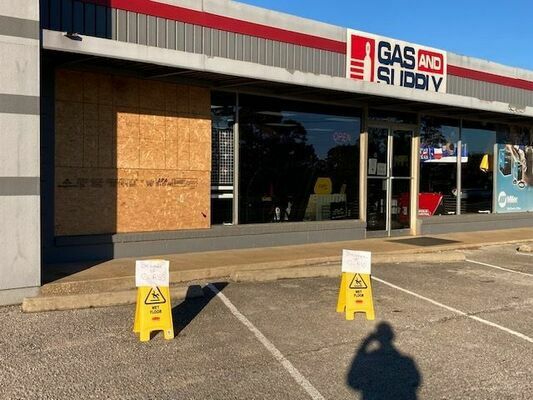 Businesses vandalized Gas and Supply (left) and Insta-Cash Pawn – located on U.S. Highway 69 in Jacksonville – recently were boarded up after unknown suspects shot out store windows with either a BB or pellet gun, according to police officials. A number of local businesses – and vehicles in some residential areas – have been targeted since Nov. 1. Photos by John Hawkins 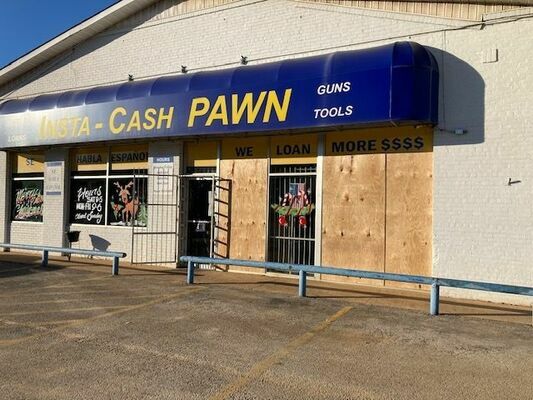 According to Cherokee County Crime Stoppers – which has increased its cash reward. of up to $1,000 for information leading to the arrest of the persons behind the vandalism – "windows continue to be shot out in the Jacksonville area. Sometime between Tuesday night and Wednesday morning, police had reports of about 20 additional victims."

JACKSONVILLE – Local police are seeking leads into numerous incidents in which a BB gun or pellet gun is believed to have been used to shoot business windows along Jacksonville’s main thoroughfares.

“It started Nov. 1, with mostly businesses reporting the incidents,” said Jacksonville Police Chief Joe Williams. “There have been a few cars shot at – but when you think about it, big windows tend to make easier targets.”

No injuries have been reported, with incidents taking place primarily when businesses are closed.

Victimized businesses have been located “mostly up and down the main corridors – Jackson, Rusk and Commerce Streets – although there have been a few of the smaller streets” reporting shots in windows, Williams said.

“We currently have a bid out to replace all three windows, and we’re going to have to remove all the stickers from them” once the replacement glass arrives, he said, noting that for now, the holes and crack are taped up.

The incident occurred sometime between Nov. 10 and Nov. 16, with the damage not immediately detect-ed, he said. “The holes were so small, it was difficult to see them right away.”

Seguin said that collectively, damage to the more than 20 windows in Jacksonville is estimated to be at least $22,000, or roughly $1,000 window.

Meanwhile, on the city’s north side, Adalinda Ford, office manager of Gas and Supply, said the store is open for business, with a damaged window boarded up to provide safety and security.

An alarm company contacted the owners of the 3023 N. Jackson St. business last Wednesday after a front corner window had been shot out.

“My boss was the one who came in and boarded things up, and met with police,” she said. “The glass had shattered, and (the repair company) told us it would be two weeks before they have any glass availa-ble – it’s crazy.”

Another targeted Jacksonville business was Allen’s Tire Shop, at 1617 S. Jackson St. Manager Tim Glidewell said Monday that there was a single hole in the glass on the building, which did not shatter be-cause the window had been tinted.

“We just came into the office a few days ago – I think it was Friday – and saw a small hole in the win-dow,” Glidewell said, noting that no injuries were reported.

Police have yet to decide a motive, but believe the suspect(s) simply have “been driving around, tearing up other people’s property” as they shoot at windows, he added.

Police are finding it challenging to trace the shootings, which are made by either a pellet or BB gun, at a time when no witnesses are available.

“People come to work and see the damage, but they may not see it for a few days, so we’re not able to tell when it happened. And with video, unless the camera is set up (on the window), it’s just hard to tell,” Williams said. “The only way to solve this is if someone tells us or we get lucky while making a traffic stop and there’s a BB gun or a pellet gun in the vehicle.”

According to a City of Jacksonville release issued Monday, JPD is pursuing several leads, including one involving a silver Jeep Liberty.

Crime Stoppers of Cherokee County is offering a $500 reward for information leading to an arrest, while Williams said he is aware of others offering a reward, as well.

“We’re asking the public to please help us – let’s get this stopped before any more damage occurs,” he said.

Contact JPD Investigator Houston Munsinger at 903-339-3340 to report damage or provide information on the case; Crime Stoppers may be contacted at 903-586-STOP.