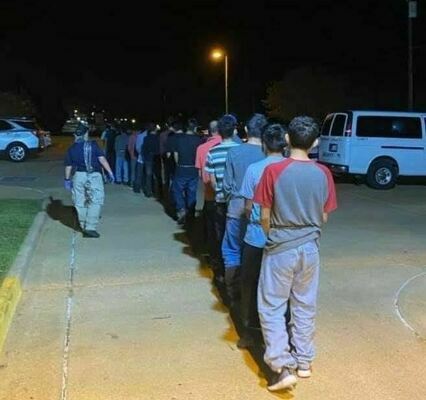 RUSK – A Houston woman arrested during a traffic stop during the weekend remained in Cherokee County Jail Tuesday morning on charges of smuggling of persons for pecuniary benefit and manufacture/delivery of a controlled substance, according to jail personnel.

Bonds for Maria Lopez, 46, totaled $45,000; of that amount, a $30,000 bond was set for manufacture/delivery of a controlled substance – PG2, a first degree felony, along with a $15,000 bond for smuggling, a third degree felony. Lopez also had a charge for a traffic misdemeanor – making wide right turn – for which time was served, officials said.

RUSK – A traffic stop in Rusk early Sunday morning culminated in the arrest of a woman charged with smuggling 24 immigrants from South and Central America, according to the Cherokee County Sheriff’s Office.

According to a report, on Oct. 3, 2021, at approximately 2:15 a.m., Cherokee County Sheriff’s Office Patrol Deputies conducted a traffic stop on a Chevrolet Suburban after observing the vehicle make a traffic violation on U.S Highway 69 South and FM 84 East in Rusk.

“CCSO Deputies made contact with the driver and identified the driver as Maria Lopez. Upon making contact with Lopez, deputies located 24 illegal immigrant passengers inside the Chevrolet Suburban,” the report stated.

Agents from the sheriff’s department and the Homeland Security Investigations discovered that all but Lopez had entered the country illegally.

Passengers originated from South and Central America – Guatemala, Mexico, El Salvador and Honduras – and allegedly were picked up in Houston by Lopez, who was transporting them to Mississippi and Florida for compensation, the report noted.

Officials also discovered that she has assisted with smuggling 12 additional loads of illegal immigrants into the U.S.

Immigration and Customs Enforcement agents transported 21 of the 24 immigrants to a secured facility in Dallas, while the remaining three people were released and transported to a temporary shelter in Longview.

Holiday magic in the air with Rusk’s Hometown C...

Pet of the Week – Chloe