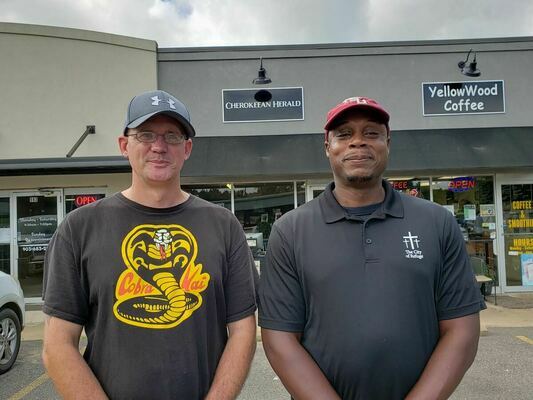 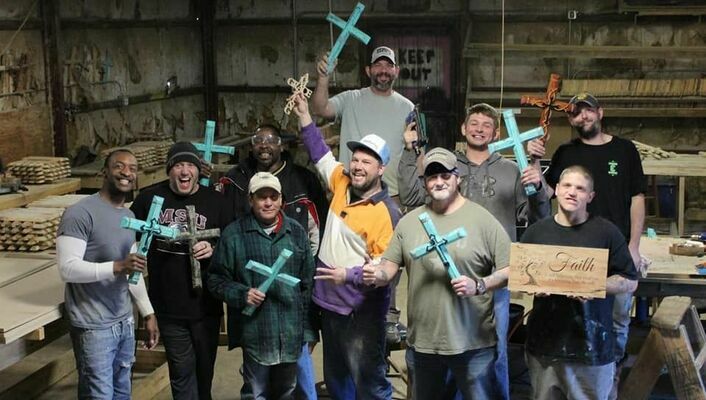 Raising funds Program participants at The City of Refuge for Men create wooden crosses and wall decor to sell as part of a fundraising effort for a building program at the Mississippi outreach. Courtesy photo
Previous Next

Called “City of Refuge,” the Lucedale, Mississippi-based ministry also can be considered a place of rescue and renewal for men dealing with substance addictions.

“It’s the one place you want when you’re in trouble,” said Kevin Sletten, as his ministry partner Demetrius McLaurin agreed.
“It sure is,” McLaurin agreed. “I’m a former drug addict – I’ve been to prison a few times; I’ve tried other programs, and they worked for a little while – they stopped me from drinking, from drugging, but I didn’t have freedom. I wasn’t truly delivered from the program: The drugs and drinking weren’t my problem, sin was my problem. The only way I could find freedom from sin was to accept Jesus Christ.”

The duo recently were ministering in Cherokee County, helping to raise funds for the City of Refuge’s building project as they spread word about the 2008 program founded by Herman Fountain.

The Christian discipleship training program is expanding facilities to house 400 men, Sletten said, relying on donations and proceeds from online and door-to-door sales of crosses and plaques created by program residents.

“We can house up to 120 right now, we have got roughly 50 men in the program right now, but COVID has really taken the numbers down – it used to be full,” Sletten noted, saying that intake is comprised of men who seek out the program as well as some intake from area jails.

“A lot (of men) get sentenced there, or will have time taken off their sentence (for going through the program). When they go back to court, it really looks good when it shows they’ve gone through our program,” he added.

The program – which shifted from a six-month to a one-year offering in March – is free of charge and doesn’t receive government assistance.

“It’s completely self-supported. We handmake crosses and plaques to sell, and we do fundraisers all across the southern United States – Texas is as far west as we go, up to North Carolina and all states in between,” Sletten said.

“It’s pretty much the Bible Belt,” McLaurin clarified, as Sletten described how information about the City of Refuge’s free program is disseminated largely through missionary work.

“Everywhere we go, we hand these flyers out, and that’s our main mission when we get out, to help guys who are struggling with drugs and alcohol, homelessness – just any kind of life-threatening disorder,” he said. “We leave those places, telling people that if they know anyone who is struggling, to make sure they get (the information) to them. Because a lot of people cannot afford (a program), being on drugs or alcohol. Most of these programs are $6,000 the first day, and we’re completely free, which makes us unique.”

A national pandemic declared 15 months ago hurt the ministry at differing levels.

Ministry teams found themselves unable to directly work with groups and businesses, who mostly closed access to curb the spread of COVID-19, and the City of Refuge was seeing a smaller intake because men weren’t seeking help.

“They weren’t coming in because of COVID, I guess because they were scared in a way,” said Sletten, who graduated from the program’s six-month model at Easter.

The men shared how City of Refuge made a positive impact on their lives.

For McLaurin, the program’s strong foundation helps solidify his faith, allowing “for God to fill up that gap in your life.

“Really, that year-long (format) is more of a time to get focusing on the word of God and how that relationship works in your life, how it helps you in life,” he said. “They have got some good leadership there that truly cares for you.”

Sletten said his journey included hitting rock bottom when he lost everything.

“I had everything taken for me, I ended up homeless for a couple of weeks and God removed everything from me: My family, my job, my car, my money. Everything. I didn’t have anything, and I had to get help. He’ll do that, if that’s what it takes. Some people don’t have to go that far; some people get it right away, but some people don’t,” he said.

“Doing fundraising has allowed me to get back into society to where I can be around temptation … I’ve never really had a problem with drugs much – alcohol was my ordeal – so I’m able to get out and be around it, and it doesn’t bother me,” he added. “So now I know when I get out, I can come out into the world and not have to worry about that.”

Through the outreach portion of the program, in which five two-man teams go out for week-long trips to different areas but always going back to Lucedale for the weekend, participants are able to give testimony and minister.

The City of Refuge for Men is a 12-month residential Christian discipleship training program located in southeast Mississippi. The free, not-for-profit program offers a long-term, faith-based recovery and deliverance program in a discipleship atmosphere, according to www.corformen.org