More than 2,000 without power in Cherokee County 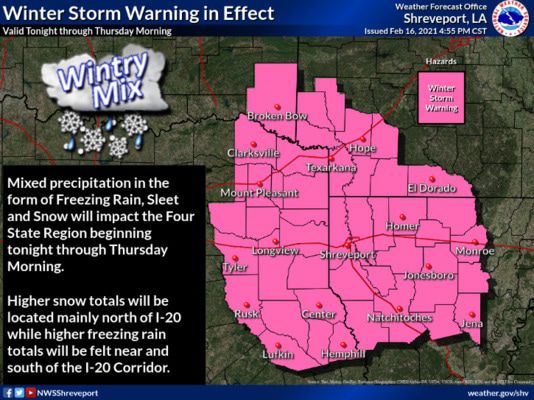 CCECA reported 1,635 current outages within the county, the longest-running one located in the Cuney-Reese area and points south, which have been without power for approximately 18 hours; Oncor reports 705 customers without power, according to outage maps.

Meanwhile, Oncor posted an emergency update on its website regarding power loss due to record low temps,

“Due to ongoing record-low temperatures and generation, ERCOT has continued to direct Oncor and utilities across the state to drop power load through maintained controlled outages,” the site stated. “Oncor was able to rotate some outages overnight, but poor grid conditions have continued to prevent us and other utilities from rotating, or rolling, the entirety of these outages, leading to extended periods without power for many of our customers.”

ERCOT officials have not been able to give an estimate when grid conditions will stabilize, and have asked that customers be prepared for continued extended outages, it added. “We urge customers to prioritize the safety of themselves, their loved ones and their neighbors.”

A weather update issued at 4:48 p.m. Tuesday by National Weather Service – Shreveport reports that a second winter storm that arrived locally is expected to last through Thursday, with temperatures increasing slightly, but still “remain well below normal” for this time of year.