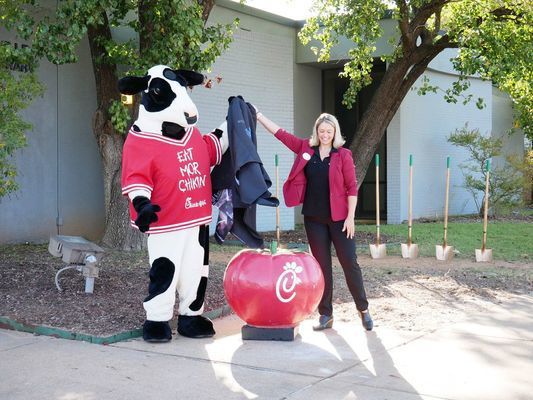 Photo courtesy of the City of Jacksonville Franchise owner Marybeth Wade and the Chick-fil-A mascot unveil the owner of Jacksonville’s newest eatery during a press announcement Wednesday at the site of the former public library.

JACKSONVILLE – A long-awaited announcement came Wednesday morning, as Chick-fil-A announced its intentions to build on the site of the recently vacated Jacksonville Public Library, at 502 S. Jackson St. in Jacksonville.

“My life dream has been to be an owner-operator of a Chick-fil-A in a small town with deep community roots,” said Marybeth Wade, a 21-year employee with the eatery franchise who oversees the Chick-fil-A in Lufkin. “After meeting with City Manager Greg Smith and JEDCO President James Hubbard, I knew that Jacksonville was the perfect location for my family.”

Local officials said bringing Chick-fil-A to Jacksonville has been an 18-month process, involving the Jacksonville Industrial Foundation and the City of Jacksonville; the sale of the location finalized in early October.

Wade estimated that approximately 90 employees will be hired for the Jacksonville location, with starting pay to be determined based on experience, skill level and expertise. Employee recruitment will begin in late December-early January, with a 2021 projected opening date as early as late spring or early summer.

“We are so excited to finally get to announce that Jacksonville is getting a Chick-fil-A,” said Jacksonville Mayor Randy Gorham. “When we were presented with the possibility of an investor group purchasing that corner on South Jackson Street, we all agreed that unless it is a major national Tier 1 brand, we were probably not interested.

“As I have served our city both on the council and as mayor during the past five years, the most-asked question and request was whether Jacksonville would ever get a Chick-fil-A – I know it’s been a long time coming and has taken longer than we all expected, but I believe that it has been worth the wait!” he said.

Smith said that while the process has been lengthy, it is “one that has paid off to get a Tier 1-level establishment at this location.”

Admitting that the sale of the local library site “was not an easy decision,” Smith said the South Jackson Street site was better suited for an entity like Chick-fil-A, and “the city and residents will see the rewards of this transaction for years to come.”

The new eatery will draw “an influx of people” to Jacksonville to dine, shop and enjoy the city’s offerings, he said. “We look forward to working with Chick-fil-A and Wade as they become an integral part of our Jacksonville community.”

Wednesday’s announcement “marks the entrance of both an outstanding brand and a proven leader in Marybeth Wade,” who has worked for Chick-fil-A for the past 21 years, serving as general manager, reinvestment coach and recently has joined the company’s leadership development team, Hubbard said. “This is an exciting project, one that will please the masses, and is likely to spur additional high-quality development.”

A post on the City of Jacksonville Texas Facebook page states that the company will immediately begin construction on the project.

Speed limit lowers through Bullard along US 69

Advent: Waiting in the joyful hope of the comin...