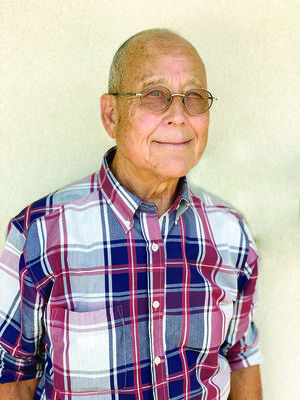 The voice of Cherokee County has now become the face of the Cherokeean Herald newspaper.

John “Robinhawk” Hawkins has stepped into the role of interim general manager of the oldest continuously published weekly newspaper in Texas. Megan Elliot, the paper’s current general manager, tendered her resignation in August as she’s taken a position with Citizens 1st Bank. Her final day with the paper will be Wednesday, Sept. 9.

“We are very pleased to welcome John “Robinhawk” Hawkins back to the Cherokeean Herald,” Lewis County Press CEO Clarissa Williams said. “He has an overwhelmingly positive disposition about the Cherokeean Herald, Rusk and Cherokee County. His long-term commitment to both are and will be evident to anyone he talks with.
“As I talked with several candidates about this important role within our company, John quickly stood out. He already knows the issues of the community. He also understands the struggles of the media landscape but most importantly he brings a genuine desire to reach out and engage readers and advertisers. A newspaper should mirror the community and reflect our long-standing tradition of coverage that can be counted upon.
“We are confident in John’s direction to forge ahead and begin growing our relationships and broadening our options. We’ve diversified our programs to better serve our community, including a complete digital program to complement our coverage. I look forward to the accomplishments of the team and the expansion of our publication. John brings community connections and a wonderful background in media, including the voice of Rusk’s former radio station. Every conversation with John highlighted his experience and solidified this was the best course for the newspaper in one of our key markets.

“We would also like to wish Megan a hearty congratulations in her endeavor with Citizen’s 1st Bank. We know she will have much success.”

Hawkins’s association with the Cherokeean Herald began nearly 38 years ago, when he worked side by side with the paper, when the late Emmett and Marie Whitehead hired him on as the morning dee-jay of their local radio station, KWRW/KTLU.

“In those days, everybody had to pitch in wherever Emmett needed, from radio to newspaper or cable company and farm,” Hawkins said. “We did it all.”

Hawkins remembers Whitehead once told him he’d always have a place, to which he said he replied, with a laugh, “Boss, you’ve hired me three times and there won’t be a fourth.”

Never say never, as they say. After the Whiteheads’ daughter Terrie and her husband Robert Gonzalez took over the operation of the paper, Robert Gonzalez managed to talk Hawkins into returning to host the popular morning radio show Talk Time once more.

After Lewis County Press acquired the Cherokeean and the radio station in 2016, Hawkins continued to host Talk Time until its demise in 2018.

“I have a deep love for East Texas and in particular, the Cherokeean Herald,” Hawkins said. “Not only is that where I met my wife, Penny, more than 32 years ago, but also the heritage of Texas’ oldest weekly newspaper.

“Our community relies on the local paper to keep everyone informed of what’s happening in Cherokee County and to give advertisers a way to reach their customers. I plan to continue that tradition and add to that heritage.”

Get outside for a good time at the Hilltop Jamb...

The Editor – Cast a ballot

Get your flu shots!