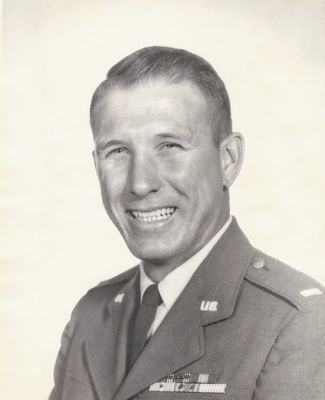 He was born on Aug. 1, 1931, in Port Arthur; raised in Weches, to Rutherford and Vera (Lovell) Crim -- both of whom preceded him in death, along with his two sisters, one brother and his beloved wife of 64 years, Betty.
He is survived by his children, Carol Trafford (Thomas), Sterling Crim (LeAnn) and Crystal Crim; grandchildren, Heather Eaton (Edward), Briana Sopala (Daniel), Laren Espinoza (Javier), Annie Ortega (Orlando), Bobby Crim (Amanda), Christopher Crim (Joanna) and Ian Arocha; 13 great-grandchildren; two sisters-in-law; and numerous nieces, nephews and friends.

He served in the United States Air Force, retiring at the rank of Lieutenant Colonel and then built a second career serving as vice president at Randolph Brooks Federal Credit Union.
He also served the Lord as a deacon at First Baptist Church in Universal City and president and board member of First Baptist Academy Universal City.

Because local ordinances barring large group gathers due to the viral epidemic a “life celebration” will be scheduled and announced at a later date. He will be laid to rest at Fort Sam Houston National Cemetery in a private gathering alongside of his wife, Betty Jean (Hogan) who passed in December of 2015.

Memorial donations may be made to the First Baptist Academy, 1401 Pat Booker, Universal City, TX 79148.