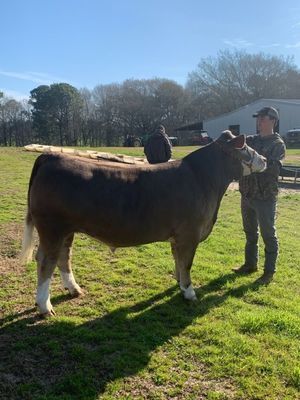 Jacksonville FFA member Brantley Bauer won first place in this year’s Houston Calf Scramble Breed Essay Contest, earning him a $400 award. He was eligible to compete in the essay contest after catching a calf during the Montgomery County Fair Association’s Calf Scramble Program, held every year during the Houston Livestock Show.

“The main purpose of the Scramble Program is to teach 4H and FFA members the fundamentals of managing a project involving the selection, caring, feeding and training for a registered beef cow,” the Association stated.

Why I Selected Rocket

I not only caught a scramble calf in Houston on March 6, but it was the Mystery Calf. For that I received a very nice gold watch.

I call it my “Mystery Watch.”

On the way home I was wearing my FFA teacher’s ear out about what to show next year at the 2020 Houston Livestock Show and Rodeo (HLSR). Then, I called my dad, woke him up, and talked his ear off. By the time I returned to Jacksonville, I had made up my mind I was going to purchase, raise and show a steer.

Even though I hadn’t even been to our county show yet, my mind was already on next year’s steer. I conducted a lot of online research about breeds, but settled on exotics. This was mainly because they are tolerant to extreme temperatures and diseases. They also have higher growth rates to ensure their productivity is high. I was leaning to something with Simmental in it. I again started talking to my FFA teacher, but this time about breeders and which one to get steer from. Having to hitch a ride with my dad we started going and looking. We finally located “the one” from a local East Texas breeder, and on April 22nd we put down a deposit. Two weeks later we picked him up.

My calf, Rocket, is an exotic steer. He is a smoky baldy. The bull was Extra Special and is a Maine-Anjou cross. This breed originated in France and is principally a beef breed. From the research I have done, Maines can be crossed with about anything in order to produce better meat, marbling and milk (1). The cow was Milkman Myer 734. There is Angus and Simmental in her bloodline. The Angus breed originated in Scotland and are known for their good marbling and disposition (2). The Simmental breed originated in Switzerland and these cattle are known for their rapid growth and drought resistance (which is good for being in Texas) (3).

I picked Rocket out of all the other exotic steers because I could see all the breed characteristics in him. The Maine in the bull’s blood line was evident in his muscling.

Even though he was young, you could see the muscle definition along his top and in the Stifle. He had light colored, soft short hair of a Simmental which might not be best for Jackpotting in the fall but would be beneficial for HLSR.

I really like his gentle personality, and I attribute that to the Angus blood line which actually is on both sides of his pedigree.

I feel that my research about different breeds and their characteristics helped me make the correct decision about purchasing Rocket. He is growing rapidly, filling out nicely and staying healthy. I know only time on my “Mystery Watch” will tell, but I am looking forward to show day. The judge makes the final decision, but in my books I have the winner.

Is it too late to plant? 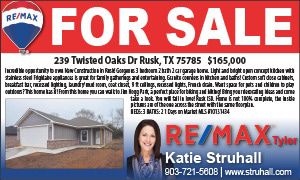