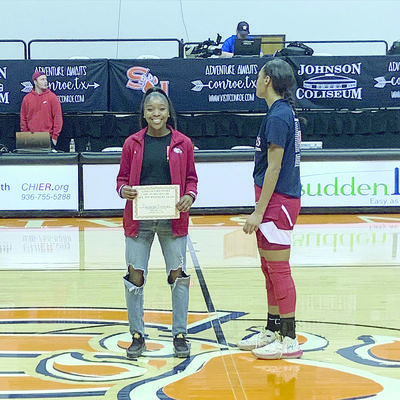 Courtesy photo
Ranaiya Kennedy, a member of the Rusk Lady Eagle basketball team, was named All Tournament at the Class 4A Region 3 Regional tournament.

Despite the difficulty of not having a home court for most of the season, the Alto Lady Jackets finished third in District 21-2A.

Their third-place finale allowed the team to enter post-season play, although it was for only the bi-district round.

The team completed the season with an overall record of 21-15, 6-4 in district. Many of the team members received District 21-2A All District accolades for their accomplishments this past season.

Mya Tyra was named Co-Offensive Player of the Year.

Areli Perez was named Second Team All District and Abbie Teutsch was given Honorable Mention.

The Bullard Lady Panthers went three games deep into the playoffs, finishing their post-season with a regional quarterfinal game.

Bullard had completed the regular season as District 16-4A champions with a district record of 12-1, 33-6 overall.

The Maidens concluded the season as undefeated District 16-5A champions with a 14-0 record, 25-9 overall.

Earning the title Player of the Year, was Maiden Grace Abercrombie.

The Rusk Lady Eagles went furthest in post-season play of all Cherokee County teams, making it as far as the regional semifinal.

With a district record of 4-4, Rusk finished second in District 19-4A standings. The team completed the season with an overall record of 17-13.

Lady Eagle Ranaiya Kennedy was named All Tournament at the Class 4A Region 3 Regional Tournament.

Jamyah Anderson was named Defensive Player of the Year.