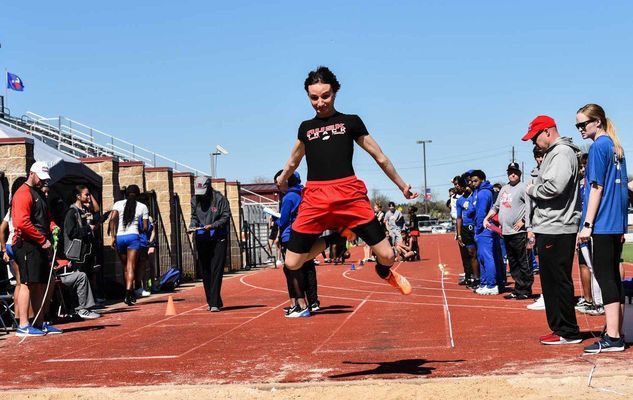 Bullard had six first-place finishes in the competition.

The team of Nicholas Hooley, Meador, Christian Johnson and Asthon Camp finished first in the 400-meter relay with a time of 3:30.74.

A height of 10’6” was enough for Zach Arroyo to beat out his competitors in the pole vault.

Desmond Fuller earned the top spot in the long jump with a 20’6½” span.

Rusk athletes earning the top spots in their events were Rylan Reynolds in the shot put with a 41’11” distance, and Garrett Blalock in the discus with a 112’5½” toss.

In the varsity women’ competition, Jacksonville was second with 124 points, Bullard was third (96) and Rusk came in sixth (35). Chapel Hill won the event with 152 points.

Runners Katelynn Hogg, Tacarra Foreman, Ashley Freeney, and Jazmine acquired a first-place finish for Jacksonville in the 200-meter relay with a time of 1:48.80.

Berlin Grossman took top honors in the 300-meter hurdles with a time of 53.62.

Ashley Waterman’s height of 5’4” beat out her competitors in the high jump.

Gabby Nichols won the pole vault with an elevation of 8’0”.

Lady Eagles Zoe Fields earned a first-place finish for Rusk with a time of 19:21 in the 100-meter hurdles.