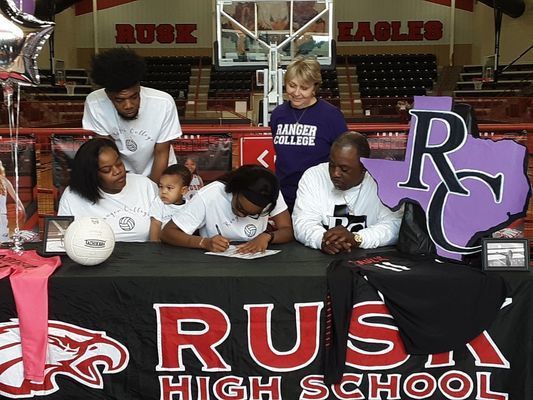 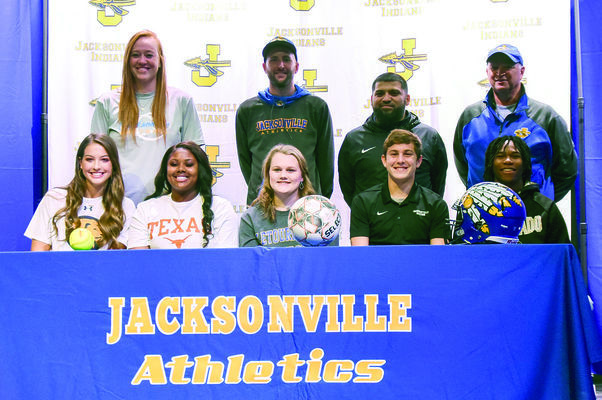 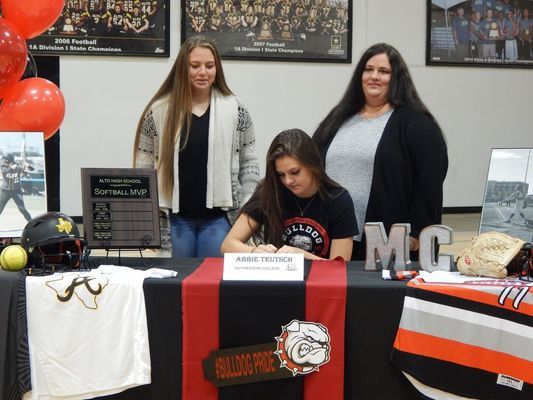 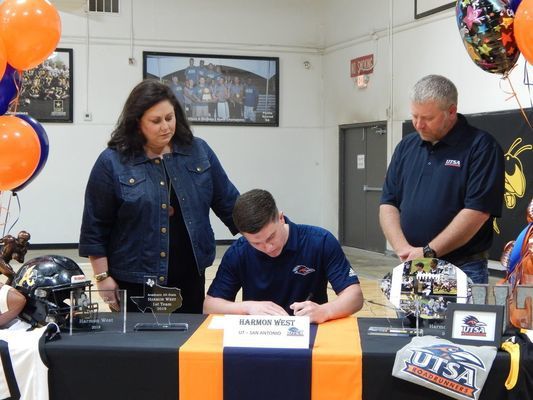 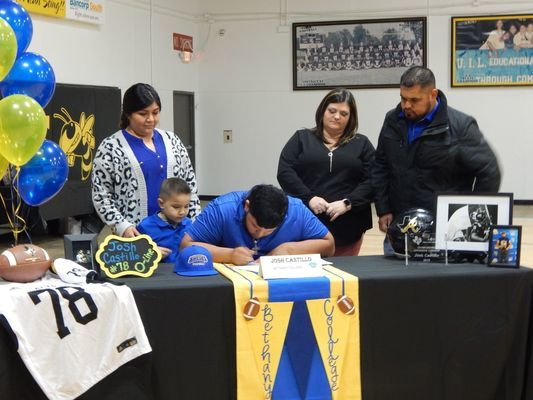 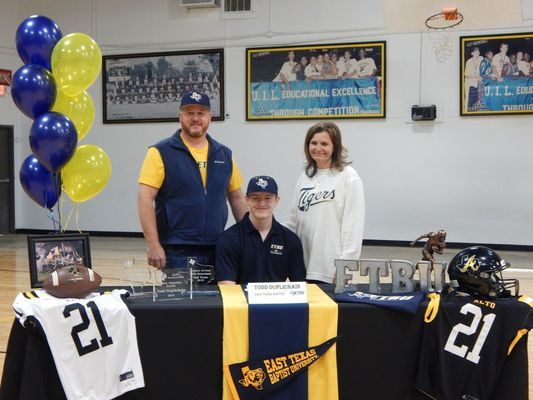 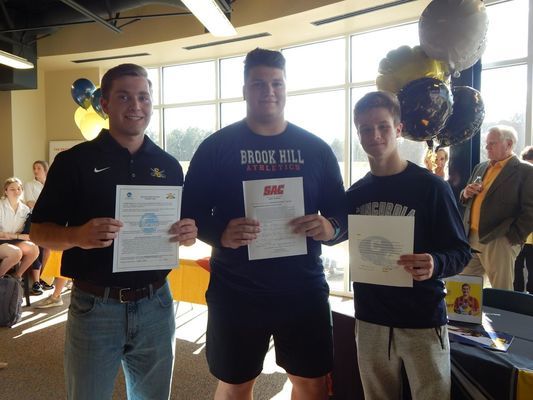 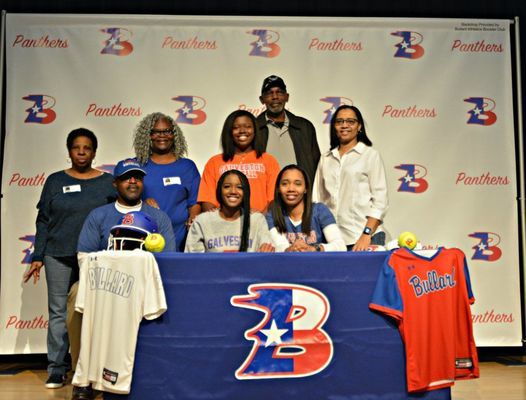 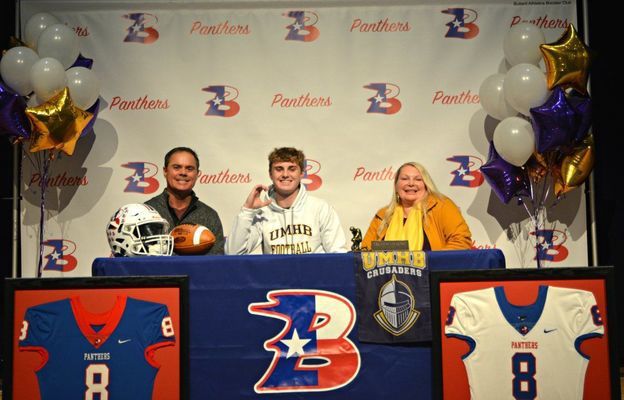 Josh Castillo, who signed with Bethany College to play offensive line on the football team, says of his recruitment that he was “extremely grateful just knowing that my talents weren’t being overlooked.” He plans to study kinesiology and become a high school coach.

“I couldn’t be happier with the choice I made,” Castillo commented.

Castillo was named 1st Team All-District 2019 for his performance on both offensive and defensive line.

Todd Duplichain, who has played both sides of the ball, will be playing defensive end at East Texas Baptist University (ETBU). He attended camp last year and liked the campus and atmosphere and ETBU was his top pick.

“I’m very grateful for the opportunity that they’ve given me and now I’m just ready to go to work for them,” Duplichain stated.

Although he hasn’t made a final decision on a major, he is leaning towards finance.

Duplichain has earned Alto Yellowjackets Most Versatile Player-2019 and Academic All-State 2nd Team honors. He was named Co-Utility Player of the Year.

Abbie Teutsch will be attending McPherson College in Kansas, playing first base and studying criminal psychology. She hadn’t heard of the McPherson until a representative of the school observed her at a camp. She later went on a campus tour and attended a camp at the college.

“I am very excited,” Teutsch stated of the opportunity to play collegiate-level sports.

Among her accolades, Teutsch was named Alto’s softball MVP for the 2016-2017 season and was co-MVP the two following seasons.

Harmon West has signed his intent to play football at the University of Texas-San Antonio (UTSA). Although he led the Alto Yellowjackets as quarterback, he also played linebacker, the position for which UTSA has recruited him.

UTSA is a school that West had hoped he would receive an offer from.

“I had seen that Coach Traylor had gotten hired, Coach Traylor is from East Texas, and I was intrigued by it and was just looking forward, hoping they would offer and they did,” West explained.

(Jeff Traylor served as head coach at Gilmer High School for 15 years before taking on coaching roles at the collegiate level. He was named head football coach for UTSA Dec. 9, 2019.)

West states he will study financing and wants to become an investment banker.

West earned the title of District MVP this past season.

Jacksonville High School, the largest of the Cherokee school districts, had the most athletes take part in signing ceremonies, five.

Although Chris Carpenter has played receiver, punter and as a return specialist during his high school career, he has signed with Colorado to play receiver with plans to study education.

“It’s a blessing and it’s an honor to do what I love at the next level,” he commented.

Carpenter recorded 60 catches for 980 yards and 10 touchdowns during the 2019 season and was named 1st Team Offense-Wide Receiver.

Cooper Coughlin, who has played soccer since the age of four, is heading to Jacksonville College to play at the collegiate level while studying business.

“It’s always been a dream of mine to go to the next level and get this new challenge,” he commented. “I’m ready for it. It feels great, being able to stay close to home and travel as well, get that game time in and hopefully win some titles.”

Kelsey Traylor has signed with Letourneau to play soccer and will study kinesiology and education, with the aim of becoming a teacher and coach.

“I had looked at Letourneau before I had actually received the offer and I just fell in love with it from there,” Traylor stated.

Saylor Williams, who signed with A&M Commerce to pitch for the Lions, states the college wasn’t her top pick.

“Whenever they had asked me to go, I was like, no, I do not want to go to that school, but I ended up going and really falling in love with it.”

Williams will be pursuing a career in nursing.

Her accolades include All-State Honorable Mention, District Pitcher of the Year, three years straight, and Cherokee County Pitcher of the Year. Her statistics include a 15-4 season record, 11-1 in district. She pitched 127.2 innings last season with a 2.0 Earned Run Average and 157 strikeouts.

Jordyn Whitaker, who will be playing softball at UT Austin, intends to study kinesiology and biology.

“I’m very excited. It feels like I’m in a dream,” she stated. “I had other offers, but they really weren’t what I wanted and then Texas came along and I couldn’t turn it down.”

In Rusk, three athletes signed their letters of intent.

After discovering representatives of the school wanted to talk to him, Sean Rogers visited the campus of Cisco. Following his visit, he discovered he liked the school. Rogers has signed to play outside linebacker and it is his desire to become a football coach.

Brennan Lucian will also be playing football for Cisco, in the position of wide receiver. He intends to study petroleum engineering and eventually attend a larger school.

“I’m pretty excited,” Lucian remarked. “It’s a great opportunity to have to show your talent. It’s a great thing; I’m excited about it.”

Jaden Rushing hadn’t considered Texas Wesleyan prior to their offer to play running back at the school. He has since visited the school and spoken with coaches there.

“Nervous,” was how he described his feeling about playing at the collegiate level. “Excited, but nervous.”

Although Rushing would like to “make it in football,” he has an alternate plan. While he hasn’t decided whether to study history or psychology, he knows he would like to teach at the college level.

Although he has played several positions on the football team; Fisher Bass inked papers to play at Concordia-Nebraska as a running back.

“I feel extremely honored and blessed,” he said of the opportunity. “A lot of people don’t get to do this.”

Bass is looking to major in business with the hopes of developing his own company.

He earned Honorable Mention-Defensive Back.

“I heard a lot about them. It’s a great school. During my visit there, it just felt natural,” he stated. “The coaching staff is amazing. It was the right connection.”

He will be studying kinesiology in the hopes of getting into coaching.

Svoboda is from the Czech Republic and believes adjusting to college will be smooth, having already experienced the transition to Brook Hill and living in the campus dorms there.

Winston Hebert has taken advantage of the opportunity to sign with Southwestern to play soccer as center midfielder, and will pursue an education in the business field.

“I’ve been looking at them for a couple of summers and then I decided to narrow the options down and they were my best option, I thought,” Hebert explained. “I’m pumped and ready to go.”

Rusk held a second event in order to celebrate Jamyah Anderson who inked her name on letters of intent to play volleyball for Ranger College, which was her first choice school. Anderson began playing volleyball in seventh grade and is “ecstatic” and “very appreciative for the opportunity” to play collegiate-level ball.

It is her expectation to study nursing to become a neonatal intensive care nurse.