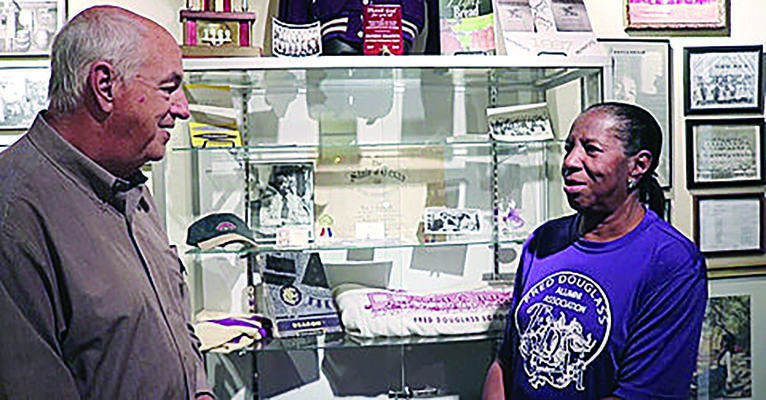 “In the 1900s, the Little Red School House was one of the first African American schools in Jacksonville.

“When the school burned down in 1921, J.H. Howard, the principal, directed the construction of the Fred Douglass School.

“First built on Elberta Street, the original Fred Douglass School was funded partially by the Rosenwald Foundation, which gave money to construct African American schools in rural areas in the south.

“The building consisted of six classrooms, a principal’s office, book room and auditorium. M.B. Davis served as the first principal from 1924 to 1956, with H.V. Jones serving as principal from 1956-1970.

“In 1930, M.C. Wade negotiated with the all-white Jacksonville School Board to allocate funds for a larger Fred Douglass School in Lincoln Park, to accommodate the growing student population.

“The school moved from its Elberta Street location to the Lincoln Park addition, which contained more classrooms and a larger auditorium.

“The school expanded again with the construction of another building located on Gaston Street named Fred Douglass High School.

“Students attended the school until 1970 when African American students were fully integrated into Jacksonville schools. After integration, the school sat empty until it burned down in 1979.

“The Fred Douglass School not only represented the systems of inequality used in the Jim Crow South, but also how Jacksonville’s African American community built educational opportunities for their children.”