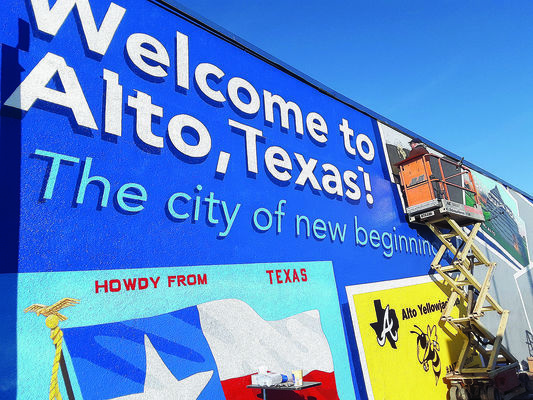 Most would agree, 2019 was tough for the city of Alto.

In April 2019, the National Weather Service reported at least two tornadoes, ranking F2 and F3, tore through Alto on Saturday, April 13. Both tornadoes destroyed or damaged more than 20 homes and other structures in Alto – including the Caddo Mounds State Historic Site and its replica of an authentic Caddo hut, St. Thomas Chapel, Alto High School and the Alto Elementary gym.

According to Alto Police Chief Jeremy Jackson, Radcliff was on his way home Tuesday, May 14, when he was contacted to perform a welfare check on a county resident.

While on the scene the officer had a medical event and collapsed.

After being life-flighted to a Tyler hospital, he was pronounced dead.

Radcliff was an organ donor and his last wishes were carried out.

The Alto community continued to rally #ALTOgether for the remainder of 2019, with cleaning up storm damage, rebuilding the Caddo site, pulling together to support their police department and passing a bond issue on behalf of AISD in the November election.

Alto resident and property owner Pastor Ron Rose wanted to do something for his community to reflect the hard work and community spirit his hometown has shown over the last few months.

Rose owns the building located on the northwest corner of the intersection of U.S. Highway 69 and State Highway 21.

The outside wall facing the intersection traditionally sports a mural featuring a map of the El Camino Real.

Rose recently hired performing artist, illustrator and part time muralist Marc Eckel, of Warsaw, Ind., who started updating the wall last month with an original design brainstormed by the Roses – a mural of ‘postcards’ showcasing all the greatest parts of his community.

“I wanted something that welcomes passersby and shows just what Alto is all about,” Rose said. “The mural that was there was about six or seven years old. I hated to see the old mural go, but I wanted to do an update with something positive that made a positive declaration of our town, highlighting what’s the strongest aspects of Alto.”

Rose, pastor of The River Church in Alto, said as ideas for the new mural started forming, he prayed for guidance.

“It was on my heart to do something to give back to and support my community, but I didn’t understand what exactly to do,” he said. “Fortunately, the Lord helped me see it.

“I just wanted to do something to reflect our community spirit. If we all do what we can to make the world a better place, then eventually the world will become a better place.

“I hope everyone enjoys the finished product and I want to thank everyone for their understanding and patience as the work continues.”

Rose said consulted his wife, other church leaders and others for help with some mural ideas before work actually began.

Once Rose settled on a design, he contacted Eckel in November 2019, to book the work. Rose said he’d seen several examples of Eckel’s work in Ireland and Canada. He’s also done murals featured in parts of Asia, Europe and South America.

“Ron and I actually go back quite a ways,” Eckel said. “When he contacted me for this project, my first reaction was ‘I don’t do murals anymore,’ but the work of an artist is up and down and as it happened I had time between jobs to fit this one in.

Eckel started on the new mural on Jan. 13. He’s been working on it six days a week, weather permitting, and anticipates completing it in about three more weeks.

“I’ve been enjoying working in Alto and getting to know the people here,” Eckel said. “The biggest challenge I’ve faced so far is the weather, but I’ve been told the weather here is always kind of weird.

“Ron’s provided me with a lot of good direction, but he’s given me plenty of leeway to make it work, too.”

Eckel, who is also a graphic designer, designs each ‘postcard’ on computer; then prints out the entire design to scale on regular copy paper; and then tapes the entire printed scene to the area the design will occupy on the wall before he begins painting, which he does free hand.

Visit Eckel’s websites, splatexperience.com and bluespaghetti.com for more examples of his performance art and other projects.