What's in the box? Mysterious box at Rusk Elementary revealed 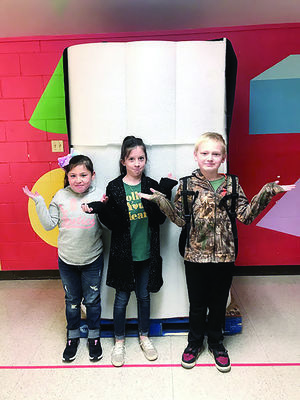 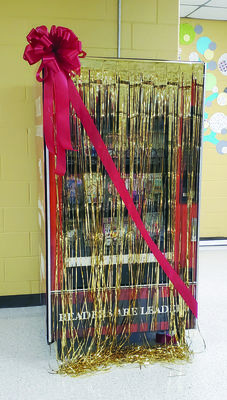 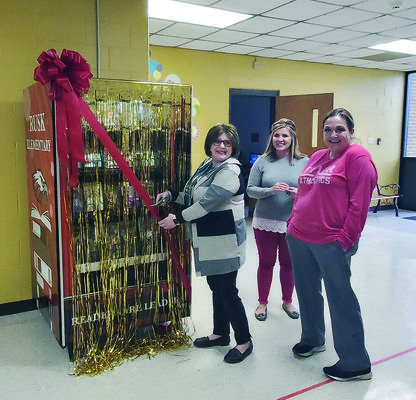 In January, a very large, rectangular box wrapped in Styrofoam was delivered to a hallway in Rusk Elementary, creating a buzz and lots of speculation amongst the students.

Students began approaching their teachers with all sorts of guesses as to what it might be, with suggestions ranging from a giraffe to a snowman.

What was hidden turned out to be something even more amazing than RISD adopting a giraffe. On Thursday, Jan. 30, the ribbon was cut and the mysterious box was revealed—a book vending machine.

The idea for the book vending machine originated with parent volunteer Kandi Wilkerson.

Wilkerson saw the idea on Facebook and then approached Assistant Principal Ashley Oliver.

The pair quickly began brainstorming ideas on how they could raise funds to make the vending machine a reality for Rusk Elementary students.

It wasn’t long before book donations were rolling in, but finding a donor for the machine itself was a bit of an obstacle.

Despite the challenge, Oliver was able to secure a donation for the machine from Bob Clayton in memory of his wife, and former RISD teacher and principal Carlene Clayton. Carlene passed away in 2018 following a hard-fought battle with cancer.

“The machine will be used as an incentive for students,” Oliver said. “Teachers will receive tokens and can rewards students for attendance, behavior, showing character, or many other things. The students then get to choose their own book as a gift.

“The school will keep the machine continuously restocked. We hope this vending machine will encourage students and families to focus on reading.”

When discussing the inspiration behind the book vending machine, Wilkerson said, “Every time I see a kid’s eyes light up at the thought of a book it makes my heart shine. As you know not all kids can afford books and some of the ones that can’t afford them also seem to be the ones that struggle with self-worth.

“I love seeing them putting forth the effort to want to do good and be kind in order to receive a gift that they may not have had the chance to get otherwise. Also, when a child learns to love a book sometimes it can take them away from the hard places they tend to want to be free of and make their life a little less hard. A book can take you places that you may never have seen before and free you from all the negative that surrounds you.”
The ribbon cutting took place after regular school hours on Thursday, Jan. 30, just in time for students to receive incentive tokens on during their 100th day of school presentation.

Those interested in donating books or funds for book purchases can contact the school for more information.