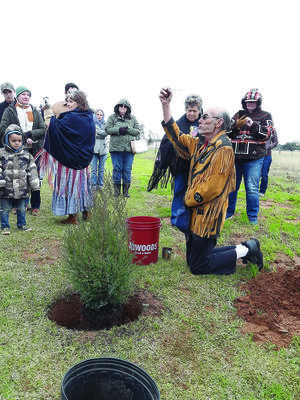 Photo by Cristin Parker
Cherokee Nation representatives Ron (kneeling) and Emma Blackfield (shown with back turned) perform a Cherokee blessing on the site of the newly planted cedar tree, which symbolizes the regrowth and rejuvenation of the Caddo Mounds State Historic Site. Caddoan Elder Marilyn Threlkel (pictured behind Ron Blackfield) and others look on.

Representatives of the Caddo and Cherokee nations were on hand to help bless the planting of a cedar tree and muscadine grapevine at Snake Woman’s Garden -- one of the only exhibits left at the site after the tornadoes demolished the visitor’s center, the replica of the traditional Caddo native hut and other attractions at the park.

“This is a very spiritual ceremony at a sacred burial ground and we’d ask that everyone remember that and act accordingly while we plant these symbols of our resilience.”

The cedar tree, which was rescued onsite after the destruction of 2019’s storms, is a symbol in many Native American tribes’ lore of regrowth, renewal and rejuvenation because they stay green all year.

“We plant this tree here, we give thanks for it,” Caddo native Marilyn Threlkel said after the cedar was planted.

The grapevine was planted after a pair of survivors from April 2019’s storms requested the vine be included in Snake Woman’s Garden, as muscadine grapes were historically a popular food item area native peoples enjoyed.

“It’s definitely a bittersweet day today,” Cherokee County AgriLife Extension Agent Kim Benton said while she greeted visitors attending the ceremony on Saturday. Benton said she and the Cherokee County Master Gardeners devoted many volunteer hours prior to and since April’s storms getting Snake Woman’s Garden established and making sure it continued to flourish.

“Snake Woman’s Garden was included at the site to be a teaching tool – Snake Woman’s story is a cautionary tale for children,” Galan told the crowd. “And it continued to flourish and produce after the tornadoes -- it’s just the perfect symbol of what our site is going through now. Growth and regeneration.”

The site now boasts a temporary visitor’s center, which includes several historical items on display, saved from the original site.

“It’s a start,” site Director Anthony Souther said. “We’re pleased to be able to provide what we have now to our visitors and are already in the process of designing our new future visitor’s center.”

Site officials also have plans to recreate the traditional Caddo Indian hut again in the future.

According to the Texas Historical Commission (THC)’s website, “Caddo Mounds State Historic Site protects and interprets a unique Texas and Caddo legacy — the remains of a large village and ceremonial center built by the ancestors of today’s Caddo people.

“More than 1,200 years ago, a group of Caddo Indians known as the Hasinai built a village 26 miles west of present-day Nacogdoches. The site was the southwestern-most ceremonial center for the great Mound Builder culture. Today, three earthen mounds still rise from the lush Piney woods landscape, where visitors discover the everyday life and the history of this ancient civilization.”

Visit thc.texas.gov for more about the Caddo Mounds.