by From RJH Athletics Department 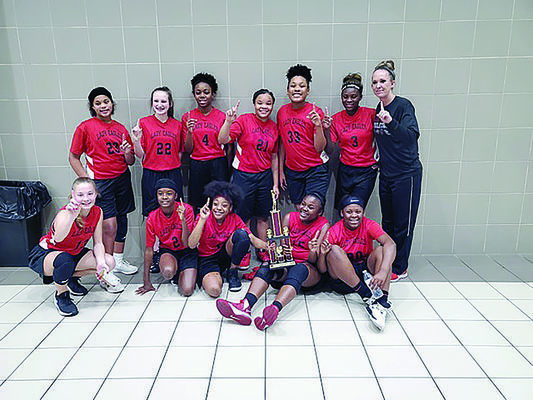 On Saturday, Dec. 14, the seventh and eighth grade girls basketball teams from Rusk competed in the Whitehouse Ladycats’ Basketball Tournament.

Going into the tournament, Coach Carinna said that defense was going to be their focus.

“(The seventh grade team) has been able to put points on the board all season,” Ford said. “The two times we have come up short was because our defense was not what it should have been. We have been putting in a lot of work on defense in practice and they really showed that they have improved in that area.”
The seventh grade Lady Eagles have won six games in a row and is 6-2 for the season.

The seventh graders played against Lindale in the first round and kept them scoreless, winning 33-0.
Kyeisha Clater led the scoring with 10 points and four steals, followed by Damaya Hart with nine points, six rebounds and five steals.
Others scoring were Hailey Session and Ja’Nya Hart, who each chipped in six points; A’briana Horn and Nyliah Tumblin, who both contributed two points each.

In round two, the RJH girls defeated Longview Pine Tree and only gave up one basket, with the score being 35-2.
Clater again led scoring with 12 points; followed by Ja’Nya Hart, who sunk eight; Damaya Hart added six; Hailey Session and Chloe Stafford each chipped in four; and A’briana Horn got one.

Game 3 matched up the much larger Whitehouse A team against Rusk seventh A team. The seventh grade Lady Eagles outscored their opponents, 105-20. The Lady Eagles came out on fire, scoring 17 points in the first half.