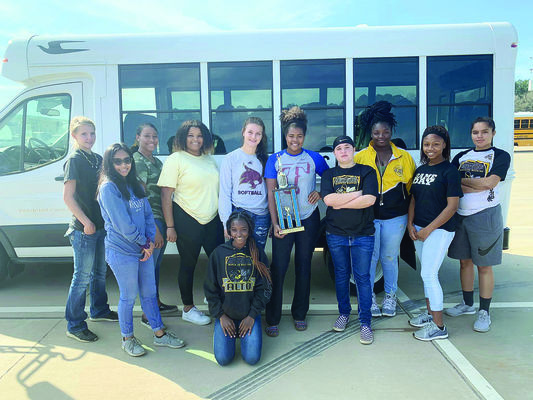 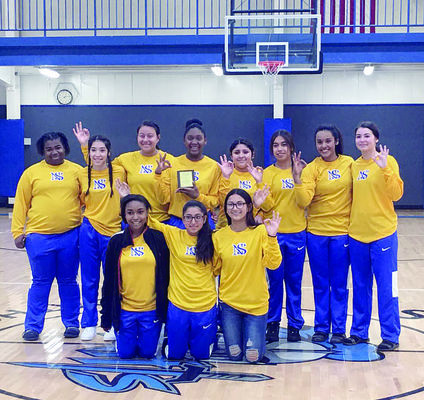 Courtesy photo The New Summerfield Lady Hornets competed in the Longview CHS Classic this past weekend, finishing in third place. The team is pictured holding the hardware they brought home from the tournament.
Previous Next

The New Summerfield Lady Hornets lost to Trinidad Tuesday, Dec. 3, by a score of 44-24.

New Summerfield allowed the Trojans to outrun them in the second period, 17-6 for a 27-14 halftime advantage.

Neither team added many points in the third quarter although Trinidad took an 8-3 advantage in the period.

The final frame belonged to Trinidad who outshot New Summerfield 14-2 for the win.

The team participated in Longview CHS Classic Thursday-Saturday, Dec. 5-7, earning a third-place trophy for their efforts.

The Lady Hornets were to visit Athens Prep Tuesday, Dec. 10, and will play in the Mount Enterprise Michael Nix Classic Thursday-Saturday, Dec. 12-14.

The Rusk Lady Eagles opened the Athens Invitational with a win over the Liberty-Eylau Leopards, 67-60.

The team made 52 percent of free throws and 45 percent of three-point attempts.

The team went 46 percent at the charity stripe and 40 percent on three-point shots.

Going up against the Bullard Lady Panthers, Rusk lost 61-53.

The team’s leading scorer was Nay Jefferson with 22 points.

The final game was a win by forfeit over Texas City.

Rusk was to play on the road at Center Tuesday, Dec. 10, and will participate in the Brownsboro Tournament Thursday-Saturday, Dec. 12-14.

It took four overtime periods, but the Bullard Lady Panthers prevailed over the Timpson Bears by a score of 54-48.

Leading scorer for the Panthers was Haley Day who sank 24 points.

Erin Berry and Haley Minton each dropped in nine points.

The Lady Panthers brought down more rebounds with 31 compared to Timpson’s 22 boards. Bullard also garnered 12 assists, one more than the Lady Bears.

Both teams shot 68 percent from the charity stripe.

Timpson had a better three-point shot percentage over Bullard, 25-20 percent.

The Lady Panthers carried an 11-1 record going into the Athens Tournament Thursday, Dec. 5.

The team was to travel to Alba-Golden Tuesday, Dec. 10, and will participate in the Brownsboro tournament Thursday and Saturday, Dec. 12 and 14.

Top scorer for the Yellowjackets was Keithen Jenkins with nine points, followed by Jay Pope who put up eight.

Frankston was the first opponent Alto faced in pool play in the Slocum tournament.

Pope was leading scorer for the Jackets with 14 points, followed by Atkins with 12 points.

The team beat the Iola Bulldogs 57-44 before entering bracket play where they fell to the Slocum Mustangs, 76-36, and the Marshal; Christian Academy Guardians, 48-44.

The team was set to visit Beckville Tuesday, Dec. 10, and will participate in the Gary Tournament beginning Thursday, Dec. 12.

The Jacksonville Indians opened the Athens Tournament against LaPoynor, dropping the game in overtime by a mere two points, 56-54.

Head coach Mark Alexander reported the team was down by 12 points at the half, and as much as 14 during the game.

Leading scorers for Jacksonville were Keion Redd, with 14 points and Desmond Fuller who sank 11 points.
“We had a shot at the end of regulation to win it, but it didn’t fall,” Alexander stated. “[I am] super proud of our kids’ efforts.”

Jacksonville defeated the Westwood Panthers at the tournament, 67-62.

Down by six points at the halftime break, 30-24, the Indians came back in the second half to outscore the Panthers in both the third and final quarters to overtake Westwood and win the game.

The Indians were slated to host the Bullard Panthers Tuesday, Dec. 10, and will participate in the Central Heights Tournament Thursday-Saturday, Dec. 12-14.

Rusk dropped the opening game of the Tommy Hill Classic to the Brook Hill Guard by only two points, 44-42.

The second game was against Big Sandy which resulted in another close finish and loss, 58-53.

Leading scorer against the Wildcats was Jay’kwon Simms with 24 points. Isiah Ward put up 17 points with Travion Harris and Terick Foreman adding five points each.

The team brought down 19 rebounds, posted 10 assists and recorded 13 steals and one block. The Eagles sank 34 percent of field goal attempts, 33 percent of three-point shots and were 50 percent from the charity stripe.

Rusk was scheduled to visit Slocum Tuesday, Dec. 10, and will participate in the Eustace Tournament Thursday-Saturday, Dec. 12-14.

The Troup Tigers are now four games into the basketball season and remain undefeated following their trip to Beckville Friday, Dec. 6.

The Tigers had a 31-22 lead over the Bearcats at the half. Although Beckville outscored Troup in the third quarter, 18-13, they never overtook the Tigers who held on for the win.

The Tigers varsity were to host Overton Tuesday, Dec. 10, and will play in the Frankston Tournament Thursday-Saturday, Dec. 12-14.

The JV will participate in the New Summerfield JV Tournament Saturday, Dec. 14.