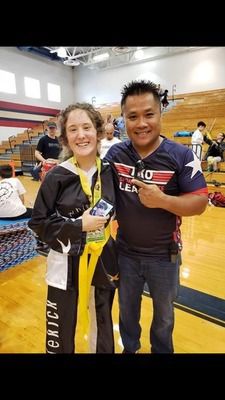 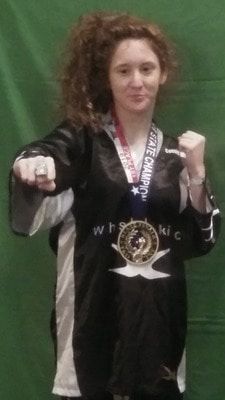 Photos courtesy of Wayne Chancellor State Karate Champion Cassie Wallace shows off her form and her championship ring and medal after winning her division in the 21st annual Martial Arts Expo and State finals last month.
Previous Next

She’s now looking forward to the 2020 season, as she seeks the top spot in the World championships, to be held in Reno, Nev., and Walt Disney World in Florida.

According to the official rules of the League, in order to compete at the State Championship level, students had to first advance in one of two qualifier tournaments earlier in the year by placing in the top three of their respective divisions of sparring, individual or team kata or weapons. This achievement then earned them the opportunity to compete at the Regional Championship level, against the top competitors in their area. Students once again had to place in the top three to earn a spot at the State Championship.

Wallace got her start in karate and other martial arts, when three-time World Karate Champion Master Derrick Chancellor started a new after school program for kids in Alto.

“We started out with about 60 kids at the beginning and only one student stayed and continued...,” Chancellor said.

“Our goal is to promote and elevate sport martial arts and we are glad to see that more and more dojos and competitors are getting involved,” Nguyen stated on the website, tkoleague.com. “When our elite athletes are successful in fulfilling their dreams our society benefits from the inspiration these athletes give us.”

Wallace also competes with Kickstart for Kids, a non-profit martial arts character development program formed by Chuck Norris on Aug. 16, 1990, as the Kick Drugs Out of America Foundation.

“In 1992, with the help of former President George H.W. Bush, the program was officially implemented in four schools in the Houston area,” the organization’s website states. “Today, the program operates in more than 59 schools throughout Texas.” The program is taught in mostly middle/junior high schools and some high schools. They currently serve more than 9,500 of today’s youth, making a positive impact in their lives by teaching character through karate.”

Wayne Chancellor contributed to this article.