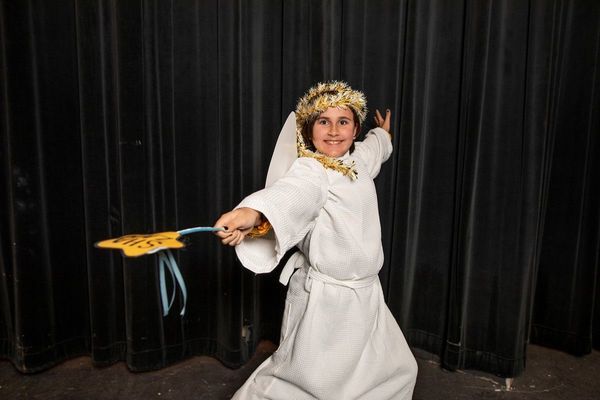 Emery Norman, as Gladys Herdman, wields the Christmas spirit as the Angel of the Lord. 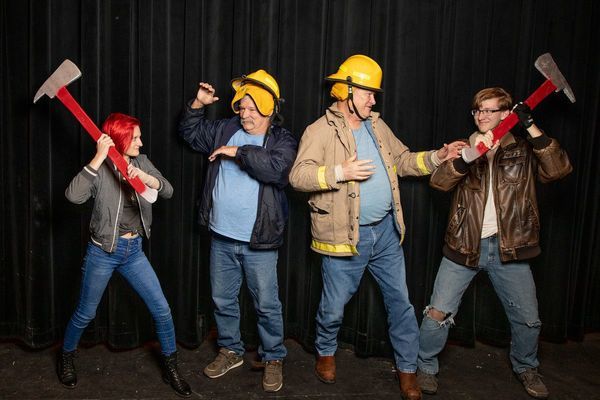 The Herdmans were the worst kids in the whole history of the world….or were they?

When Charlie Bradley, played by Peyton Johnson, boasted of the fun he has at Sunday school, he never dreamed that he would inadvertently invite the Herdmans to his ‘safe place’. Imogene, Ralph, Ollie, Gladys, Leroy and Claude, played by Autumn Canty, Kaleb Ward, Katie Sohn, Emery Norman, Elisha Adair and Kevin Swindell respectively, show up for Sunday School just in time to take over the Christmas pageant. Amidst fires, fighting wise men and a stray ham, the true meaning of Christmas begins to emerge through a hilarious and heartwarming story.

The Best Christmas Pageant Ever (BCPE) play is adapted from the book of the same title by Barbara Robinson which was released in 1971. The play is narrated by Beth Bradley and revolves around the memories she has from the year the Herdman’s took over the pageant and the lessons she learned from them. Teen Beth is played by Mattie Oliver and Josie Fox portrays adult Beth as the narrator.
“This is my second chance to direct this delightful play and there is a good reason,” said Sheilah O’Heany, director. “Best Christmas Pageant Ever is such a wonderful story and it always draws great actors-and their families-who want to be a part of its holiday message. It’s also been fun to think of ways to keep it fresh and unique from previous productions and I’m feeling confident tha we’re doing just that.”

“I am very excited to return to the stage and reprise my role as the Fire Chief,” said Jerry Parker.

BCPE is the second play of the 47th season at the Cherokee Civic Theatre and there will be three performances over one weekend. Opening night will be Friday, Dec. 13 at 7:30 p.m.

All seating is general admission, except for CCT members who may reserve their seat. Memberships for the 47th season are still available and can be purchased by calling the theater.