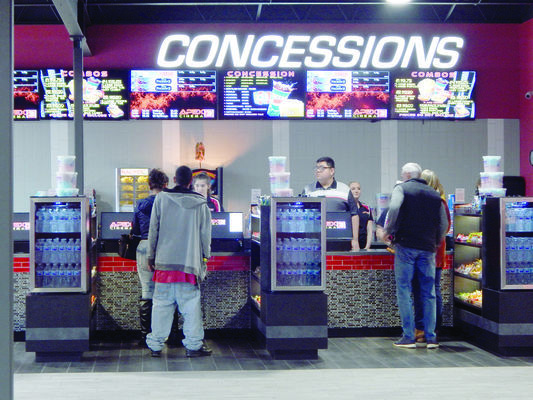 Photo by Michelle Dillon
Local movie-goers check out their options at the newly renovated concessions counter, featured in the new lobby of recently refurbished Apex movie theater in Jacksonville. The theater has reopened for business.

The local three-screen movie theater in Jacksonville recently closed to undergo renovations, making a couple of major changes to a movie-goer’s experience.

The Apex model is to offer self-serve concessions at the same point where movie tickets are purchased.

“You come in, you buy your tickets and concessions all in one spot so you’re not stuck waiting in two different lines,” stated Cody Carter who serves as general manager.

Although ticket pricing has increased by 50 cents, concession prices have been reduced across the board. Now, when ordering popcorn, nachos or drinks, customers are allowed to fill the drink cups, popcorn buckets and add as much cheese to the nachos as they prefer. Self-serve items also come with free refills.
Apex has extended the foyer approximately 14 feet, according to Carter, enlarging the lobby space.
“It really opened the place up, made it just a little bit bigger and they took out the drop ceiling so that opened it up quite a bit also,” Carter commented. “Before it was always so stuffy and enclosed and claustrophobic, just the fact that it’s open makes it a little bit nicer.”

The seating in each of the screening rooms has also been replaced. The old hard-backed cloth seats are gone and new full reclining seats have been installed. Although the staff did their best to keep them as nice as possible, the cloth seats were difficult to maintain and were at least 15 years old, according to Carter.

Having worked at the theater prior to the renovation, Carter stated that most of the complaints received were about the old seats.

“We took all those out and we’ve put in these really nice recliner seats,” Carter said. “They’re actually really comfortable and I was actually pretty surprised. They’re super comfortable and recline all the way back.”

The change has reduced the number of seats from 217 to 113 per auditorium, but Carter doesn’t expect the reduction in seating to affect the theater.
“It took out about 100 seats per auditorium, but most of the time those 100 seats would go wasted anyways just because most movies don’t pull as huge of a crowd to fill up 217 seats here in Jacksonville,” he explained.

Movie-goer Cynthia Barnett Willis says the old seats were “horrible,” but “you really feel uptown” in the new recliners.

“What’s great is they have lots of room for walking,” Willis said. “You’re not having to shove in and make people move their legs. I think it’s going to be great.”

For movie listings, show times or to purchase tickets, visit apexcinemas.movie and choose the Jacksonville site under the locations tab.

The end of an era begins - Demolition on Rusk S...