U.S. 69 construction project through Wells coming to a close 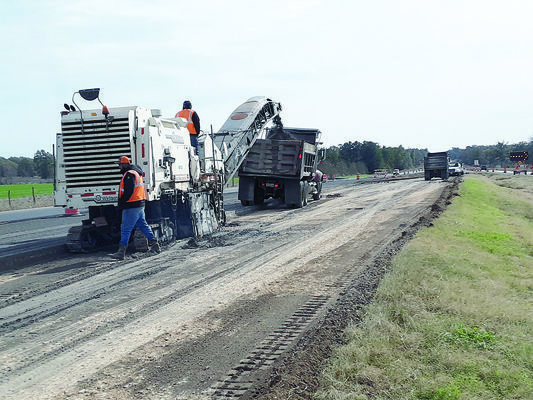 Photo by Cristin Parker
Crewmen continue work on the northbound side of U.S. Hwy. 69 just outside of Wells last week.

The light at the end of the tunnel is getting brighter for the citizens of Wells.

Through traffic on U.S. Highway 69 is now using the new east side lanes of the roadway as Texas Department of Transportation crews start the process of building the other side of the highway.

“Last week, southbound traffic was shifted to the center turn lane to facilitate paving of the new southbound lanes,” a release from TxDOT states.

The contractor, Longview Bridge and Road, Ltd., has begun work on the final pavement surface.

The project, which began in March 2017, is expanding the highway from two to four lanes and adding a center left-turn lane through town.

“It was a little crazy when they moved the barricades and switched lanes, but it seemed to have worked itself out with no serious problems, so we’re grateful for that,” Wells City Secretary Melanie Pounds said.

The $17.6 million project is part of TxDOT’s Texas Trunk System. According to TxDOT’s website, the Trunk System is a “network of rural divided highways that complements and includes elements of the Interstate Highway System.”

Minimal design criteria for the Trunk system specifies each highway be at least a four-lane divided roadway.

“The Trunk System will serve as a principal connector for all Texas cities with over 20,000 population, as well as major ports and points of entry,” the website states.

As reported in the TxDOT Minute Order 910209, total mileage of the Trunk System is limited to 11,500 miles.

TxDOT officials remind motorists to be aware of road construction workers along the highway in Wells and across the state. The speed limit through the construction in Wells has been reduced on the northern end of the project until work is completed.

“As the state’s population continues to boom, the price of progress can mean more than 2,500 active TxDOT work zones at any given time,” TxDOT’s website states. In 2017, there were 27,148 work zone crashes in Texas, resulting in 199 fatalities and another 813 serious injuries. The leading causes of work zone crashes statewide – speeding and driver inattention – are entirely preventable. While many TxDOT workers are injured or killed in work zones, it’s motorists that make up 82 percent of work zone fatalities.”

By law, drivers are required to move over or slow down when approaching TxDOT crews, emergency vehicles or tow trucks stopped on the roadside or shoulder with flashing blue or amber lights.