by By Arron Swink Contributing Writer 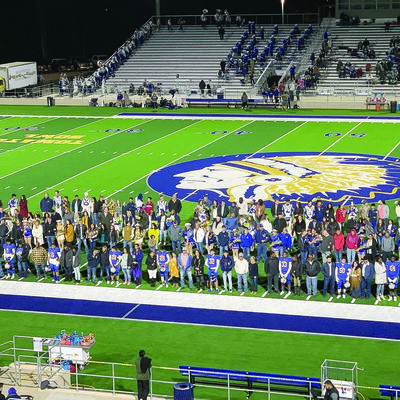 JACKSONVILLE – The Jacksonville Fightin’ Indians found themselves playing only for pride in Friday night’s District 9-5A-II finale as they welcomed the Lindale Eagles to the historic Tomato Bowl on Senior Night. Lindale, who had already qualified for postseason play, held off the Tribe by a score of 64-50 in a thrilling shootout. The loss dropped the Blue and Gold to a final tally of 2-8 overall and 1-6 in district action without a home victory.

Both teams showcased offensive stars with video game-like stats on the night. The Eagles were paced by running back Jordan Jenkins who torched the Indian defense for 271 yards and eight rushing touchdowns on 25 touches. The Tribe spread the scoring around a bit more evenly, but it was senior wide receiver Chris Carpenter who led the way. The University of Colorado commit hauled in four scoring strikes from junior quarterback Patrick Clater as he racked up 219 receiving yards on 11 catches for an average of 19.9 yards per catch.

Clater also found senior receiver Jaylon Freeney for two scores through the air. With only four catches on the night, the fleet-footed Freeney amassed 82 yards.

The final piece of the three-pronged JHS receiving attack, Tyrees Gipson, caught two passes for 38 yards as well as adding a rushing touchdown from nine yards out.

While Jenkins dominated the scoring for the visiting team, the Eagles also got a rushing tally from quarterback Luke Poe, who found the end zone from 37 yards in the second quarter. Poe also connected with receiver Conner Boyette for an 11-yard score in the fourth quarter of play.

Jacksonville actually held the edge in terms of yardage, by a total of 516 to 483. The Tribe ran ten more plays than the Eagles – snapping 67 times to the visitors’ 57. The home team’s offense on Friday night was pass-heavy, as in fact it was all season. JHS threw for 358 yards while Lindale tossed for 126.

The Eagles’ attack was almost all Jenkins on the ground. The Blue and White rumbled for 357 yards while the Tribe managed 158. That total was good for one of Jacksonville’s best of the season.

Jacksonville has missed the playoffs for the second consecutive season and will head into 2020 still looking for its first triumph in the Tomato Bowl since the renovation of the downtown landmark. The Tribe may very well have some new opposition to contend with next season as the UIL will realign districts in February. Realignment is likely to bring significant changes to the Tribe’s non-district slate as well.

For now, the Fightin’ Indians head into offseason workouts with an eye to spring football and preparing to challenge all comers starting in late August.