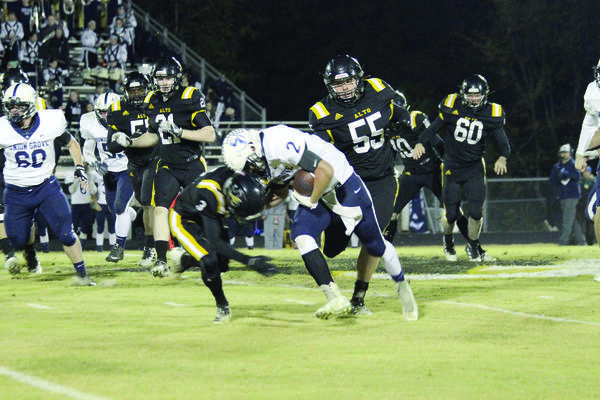 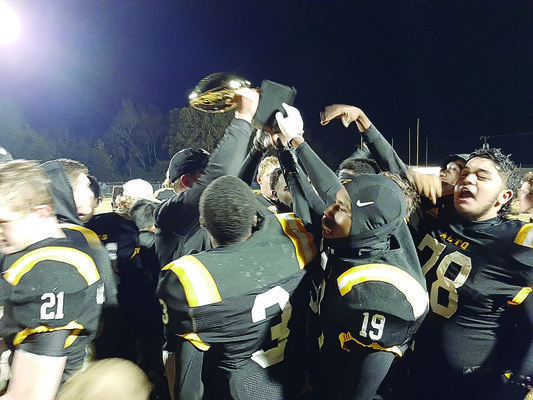 Having routed Union Grove, 50-15, Alto’s Mean Sting completed the 2019 regular football season with a perfect record, 11-0 overall and 5-0 in district.

In the final game of the season, Alto recorded 540 offensive yards while holding Union Grove to 132 yards. The vast majority of the Jackets’ offensive yardage was gained by utilizing the ground game. Aaron Skinner recorded 220 yards on 20 carries, including a one-yard touchdown. Vi’Dareous High toted the ball 10 times for 195 yards and two touchdowns, 97- and 17- yards respectively. Skyler Atkins added 68 yards on four runs, including a 48-yard touchdown. West ran twice, each time resulting in a one-yard touchdown for the Jackets.

Head coach Ricky Meeks said he was “extremely proud” of his team when they gained the final win to complete an undefeated season.

“They’re the ones coming and doing all the work,” Meeks stated. “They put in the time since we got going Aug. 5. It’s something that they have worked and put in a lot of hours into so I’m extremely proud of them and excited about where we’re headed next week.”

Senior Harmon West experienced a hard hit during Friday’s game against Union Grove and was pulled from play. Meeks said West coming off the field was just precautionary.

“He’ll be fine moving forward and no worries about him not playing next week,” Meeks commented.

With an undefeated season, Alto earned the District 10-2A-1 championship title and moves into post-season play. The Yellowjackets (11-0) will face the Cayuga Wildcats (4-6) in Jacksonville’s Tomato Bowl. Kickoff is set for 7 p.m. Thursday, Nov. 14. The victor will claim the Bi-District title and advance to the area round playoff against the winner of the Joaquin Rams (8-2) versus Shelbyville Dragons (7-3) match.