by By Josie Fox josie@thecherokeean.com 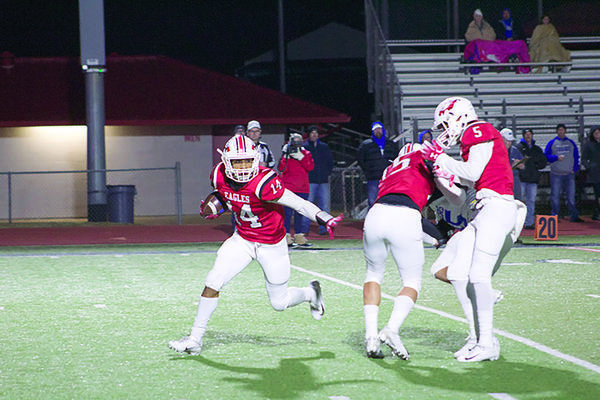 Rusk hosted the Wills Point Tigers on Friday, Nov. 8 for the last regular game of the season. The Eagles had hopes of finishing the season with an undefeated district run, but fell to the Tigers who showed consistent scoring throughout all four quarters.

Rusk kicked off to Wills Point and the Tigers were able to move the ball 14 yards downfield, but a fumble recovered by Rusk gave the Eagles control of the ball on their own 29-yard line. The Eagles made a valiant effort move the ball, but with seven minutes left in the quarter, the Eagles turned over possession to the Tigers on downs.

The Tigers gained control of the ball on their own 27-yard line and within a few plays were able to cross the plane, scoring the first touchdown of the night. A failed PAT left the score 6-0. Possession of the ball exchanged hands a few more times ending the first quarter without either team completing any additional scoring plays.

Wills Point opened the second quarter with a 2-yard rushing touchdown and successful PAT, bringing the score up to 13-0.

With 11 minutes to go in the second quarter, Rusk gained control of the ball on the Wills Point 49-yard line, but a fumble allowed the Tigers to re-gain possession of the ball. The Tigers wasted no time finding their way back to the endzone, scoring their third touchdown of the night. A failed PAT brought the game score up to 19-0.

With nine minutes left in the first half, the Eagles recovered a Wills Point fumble, giving them control of the ball on the Tigers 44-yard line. Rusk made quick work of moving the ball into the red zone, setting #4 Jaylon Hall up to complete the first Eagle touchdown of the night. The Eagles went for a two-point conversion, but were unable to score, leaving the score 19-6.

The third quarter started off slow with neither team scoring until the final minutes. Wills Point rushed for a touchdown with less than a minute to gain a three touchdown lead over the Eagles.

The Tigers dominated the fourth quarter as they went on to score two more touchdowns within the first half of the quarter, followed by a two-point rush to bring the score up to 46-6.

With three minutes of game play left, the Eagles made their way back to the end zone for their second and final touchdowns of the game. Final game score was 46-18.

The Eagles head into playoffs this Friday, Nov. 15, against the Salado Eagles. Salado currently sits at 7-3 overall for the season and 4-2 in district. Historically, Salado averages 31.6 points per game compared to 21.6 for Rusk, with the second quarter being their strongest. If the Eagles are able to jump ahead and keep Salado at bay going into halftime, they stand a good chance of winning the game.