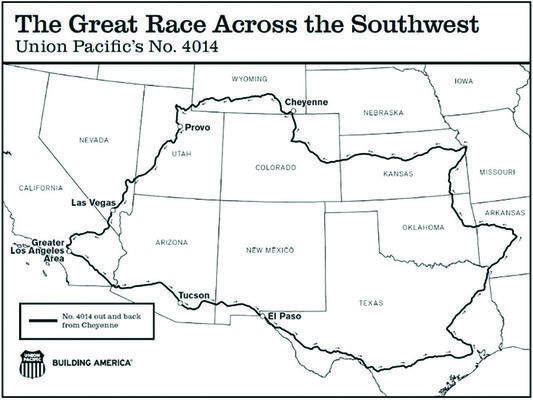 On Sunday morning, Nov. 10, Union Pacific’s historic Big Boy steam locomotive No. 4014 will roll into Jacksonville at 9:15 am at the Patton Street crossing and is scheduled to depart at 9:30 am.

It will leave from Palestine at 8 a.m. and should arrive in Troup at 10:30 am at the South Railroad Loop crossing at Front Street. Union Pacific notes that due to the dynamic nature of these operations, running times and scheduled stops are subject to change and the most accurate schedule information can be found at: up.com/heritage/steam/schedule/index.

The Big Boy steam locomotive is touring the Union Pacific system to commemorate the transcontinental railroad’s 150th anniversary.
Only 25 Big Boys were built exclusively for Union Pacific Railroad, the first of which was delivered in 1941. The locomotives were 132 feet long and weighed 1.2 million pounds.

The Big Boy’s return to the rails is the result of more than two years of meticulous restoration work by the Union Pacific Steam Team. No. 4014 is the world’s only operating Big Boy locomotive.

The tour named The Great Race across the Southwest left Cheyenne, Wyo. and will return there after visiting 12 states.