Alto one game from perfection 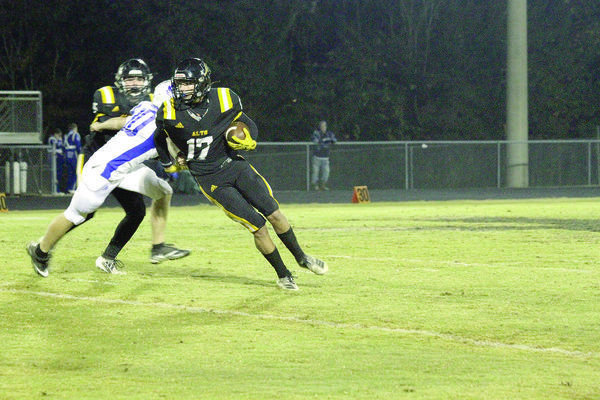 The Alto Yellowjackets earned another blowout win, 57-8, over the Hawkins Hawks last Friday. The undefeated team (10-0, 4-0) is now just one game away from a perfect season.

Although the Jackets made use of the passing game against Hawkins, they kept more to the ground with Aaron Skinner and Je’Darius Bolton leading the way. Skinner totaled 254 yards and five touchdowns on 19 carries. Bolton recorded 30 yards and two touchdowns on 11 totes. Vi’Dareous High added 41 yards on four runs and Taylor Bowman gained 37 yards on two carries. Rushing yards accounted for 412 of the total 593 offensive yards.

Skinner is credited with all three touchdowns in the first quarter, on runs of two-, six- and 32-yards respectively. With two two-point conversions by Skinner and one by Todd Duplichain, Alto held a 24-0 first quarter lead.

During the second period, Skinner ran the ball seven yards for a touchdown and Atkins caught a 12-yard pass for a touchdown. With one successful PAT, Alto widened the margin to 37-0 by the halftime break.

Returning for the second half, Skinner and Bolton each ran the ball in for touchdowns of 53- and 20-yards respectively. Bolton was successful on a two-point conversion, giving the Jackets 14 points for the quarter. It was the only quarter in which Alto allowed the Hawks to score, ending the period with a 51-8 margin. There was only a single score in the final frame. Bolton carried the ball into the end zone from five yards out.

Alto (10-0, 4-0) has one home game remaining in their district schedule. Kickoff against the Union Grove Lions (4-5, 1-3) is slated for 7:30 p.m. Friday, Nov. 8. The Jackets have clinched a spot in the playoffs and should they beat Union Grove Friday, they will have completed a perfect undefeated season.