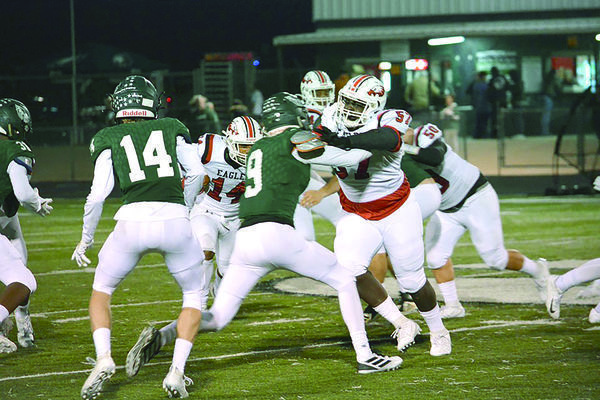 With a 12-7 victory over Canton, Rusk proved themselves to be the dominate Eagles.

Although Canton received the opening kick and had first possession, Rusk spoiled any hopes they had of an opening score. Connor Day recovered a Canton fumble, giving Rusk possession on Canton’s 46-yard line. Unfortunately, Rusk did not capitalize on the turnover, returning possession to Canton on their own 15-yard line.

The remainder of not only the first quarter, but the entire first half of the game, the two teams would trade possession of the ball. Neither team was able to score before the break. Despite sacks by Jahiem Upshaw and Andy Enriquez in the first quarter and Upshaw in the second period, Rusk could not gain enough momentum to carry them across the goal line.

The Rusk defense made a goal-line stand against Canton just before the halftime break. With Canton on Rusk’s six-yard line and with less than a minute to go until the break, Upshaw sacked the quarterback, dropping him at the 16-yard line. The Rusk Eagles then blocked the kick by Canton, preventing any score.

Rusk received the kickoff to open the second half. They took possession of the ball on their own 33-yard line, but had to punt. Canton started with good field position on their own 41-yard line. The Canton Eagles were first to put points on the board, completing a 26-yard pass for the touchdown at about the nine-minute mark. A kick through the uprights gave Canton a 7-0 lead over Rusk.

Late in the third period, quarterback Jaylon Hall connected with Tawokoni Cook on a long pass to give Rusk a first possession at Canton’s 12-yard line. Hall made the score on a two-yard carry, putting Rusk on the scoreboard. The two-point conversion attempt failed, but Rusk was only a single point behind Canton, 6-7, as the game went into the final frame.

Just a couple minutes into the fourth quarter, Brennen Lucien intercepted a Canton pass giving Rusk possession about their own 29-yard line. Jaden Rushing was handed the ball and he carried it to midfield. The Rusk Eagles continued to churn up turf as until they reached the end zone on a 28-yard pass to Isiah Ward. Once again the two-point conversion failed, but Rusk was in the lead, 12-7, a score which would hold until the end of the game.

The win gives the Rusk Eagles a 3-0 conference record. With only a single game remaining in the district schedule, the Eagles could finish the year with a perfect league record. Rusk is currently atop the District 7-4A standings. With a win this week against Wills Point (2-1) who is second in league standings, Rusk would be the undisputed district champions. The Eagles have already assured themselves a place in the playoffs.

Kickoff is set for 7:30 p.m. when Rusk hosts the Wills Point Tigers Friday, Nov. 8. The game this week will also serve as Senior Night for the Eagles.