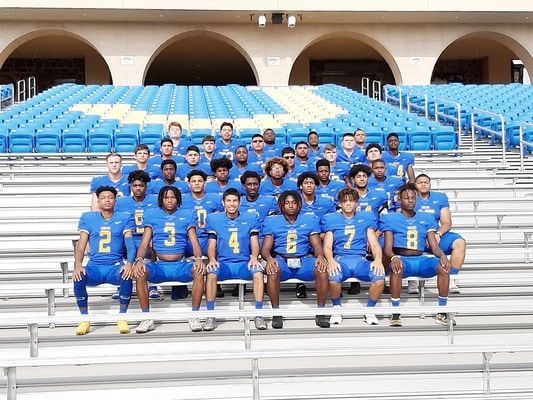 Every now and then a football game is remembered for a costly officiating mistake. Such infamous events as the “Fifth Down” on which the Colorado Buffaloes defeated the Missouri Tigers in a Big Eight game in 1990, or the “Fail Mary” (also known as the “Inaccurate Reception”) which gave the Seattle Seahawks a victory over the Green Bay Packers back in 2012 serve to highlight the fact that football officials are human. The Jacksonville Fightin’ Indians found themselves on the wrong end of such a controversy on Friday night, falling by a score of 33-27 to the Mount Pleasant Tigers in a District 9-5A-II contest.

The game was exciting and competitive throughout as the Tribe looked to start their first winning streak of the season as well as secure the first victory since the renovation of the historic Tomato Bowl. The Tigers and the Indians matched up very well in terms of size and speed and the result was a contest which quite literally came down to the last play of the game.

Mount Pleasant’s offense alternated between a modern shotgun/spread look a two back/two tight end Wing T variation which seemed to come straight out of the 1960s. It was that old-school set which resulted in the first points of the night when MPHS running back Jalen Williams charged in to the endzone from five yards out after a lengthy possession at the 1:22 mark of the first quarter. The PAT by Tiger kicker Josh Gongorah gave the visitors the 7-0 lead.

Where the Tigers chose to focus on the ground game, the Indians lit the scoreboard through the air just after the second quarter had begun. Tribe junior quarterback Patrick Clater uncorked a gorgeous 40-yard scoring strike to senior speedster Jaylon Freeney just nine seconds into the frame. Alejandro Pina-Sanchez added the point after to level the proceedings.

Tiger QB Kaleb Thompson, not one to be outdone in the passing game, got the Black and Gold back in front when he connected with his favorite target, the tall and athletic Jamarian Brown, from 15 yards out with 4:35 to go in the second. Gongorah booted true again and the Tigers went up, 14-7.

At that point, the fans in the historic downtown landmark knew they were witnessing a back-and-forth battle between two teams eager to stay mathematically alive in the district’s playoff race. When Clater and Freeney hooked up for a second touchdown minutes before halftime, the excitement level inside Tomato Bowl ratcheted up another notch. Pina-Sanchez brought the teams even again before they headed to the locker rooms.

The final three touchdowns of the first half showcased the squads’ passing attacks as they hurled haymakers like heavyweight combatants. To begin the second half, both teams would showcase powerful running – aerial accuracy replaced with power and precision.

Williams found the endzone for his second score of the game from two yards out at the 7:42 mark of the third quarter. Gongorah missed the PAT to the left and MP held the 20-14 lead.

Clater showed his running ability on the ensuing JHS possession when he took the read-option snap three yards for the score to the delight of the home crowd. Unfortunately for the Indians, Pina-Sanchez also failed to convert the PAT, so the teams remained deadlocked at 20.

Thompson put the Tigers back out in front a little over two minutes before the end of the third quarter when he heaved a 40-yard score to Johnny Smith. Gongorah’s conversion gave Mount Pleasant a 27-20 lead that would stand until the 8:24 mark of the fourth.

It was then that Clater repeated his running feat from earlier in the ballgame, notching a touchdown from three yards out. Pina-Sanchez added the extra point to bring the sides level again at 27.

Williams would tally for the Tigers again as he plunged in from three yards with 2:40 remaining in the contest. Gongorah failed to add the PAT yet again.

Jacksonville played the last two minutes of the game as well as an offense can and found themselves in a goal-to-go scenario with second left. Clater took it upon himself to try multiple runs, ultimately finding the ball sitting at the one-yard line on fourth down with enough time left for one more charge at the goal line.

Clater took the shotgun snap and ran as hard as he could into the middle of the line behind center Aiden Gay. Video replay would later show the Clater’s entire body (plus the ball) crossed the plane before he was shoved back violently.

Neither of the line judges tasked with watching the play were able to say they had seen what happened when asked by the head referee. Ultimately, the call on the field was settled as a stop and the Tribe’s hopes were dashed through no fault of their own.

Despite putting up 412 yards to the Tigers’ 415 and hanging in the fight all night long, the Indians found themselves eliminated from playoff contention in frustrating fashion.

Jacksonville will host the Lindale Eagles this Friday night. Tribe fans can listen in on JHS-Sports.com as the home team plays for pride. The pregame show will begin at 6:45 with kickoff set for 7:30.