In the military (vehicle) now 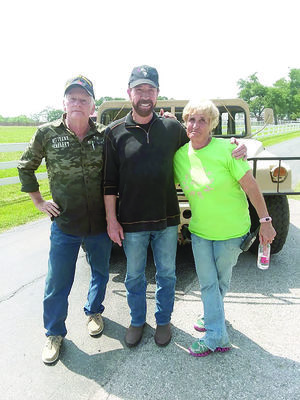 Courtesy Photo Tom Townsend, left, and his wife Jan, right, recently worked with Chuck Norris and the History Channel by providing their Humvee for the channel’s show ‘Epic Guide to Military Vehicles’. 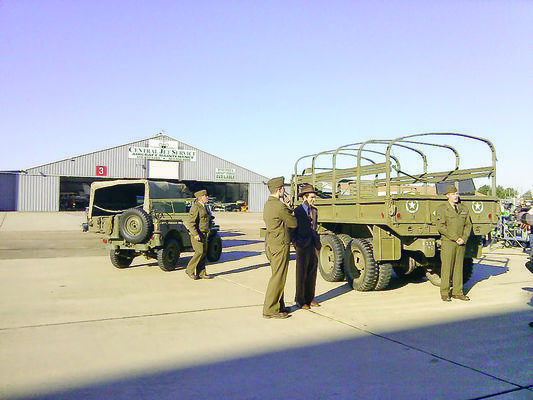 Old military vehicles don’t die – they just get drafted into the movie business, thanks to one local couple.

Veteran Tom Townsend and his wife, Jan, have acquired, refurbished and continue to maintain a fleet of historic military vehicles from the World War II, Viet Nam, Korea, Cold War and Desert Storm eras – many of which have been featured in the YouTube series, Military Motor Pool; documentaries; training films; major motion pictures; music videos; and parades.

“Most recently we provided our Humvee to the show, Epic Guide to Military Vehicles, on the History Channel, with Chuck Norris,” Tom said. “I hadn’t worked with Chuck before, but I worked with his brother years ago on the Universal Soldier movie. Chuck was great. I’ve never met anybody nicer in the business. He’s a true Texan at heart.”

The couple’s collection includes artillery tractors, Humvees, jeeps, deuce-and-a-half cargo trucks, ambulances and even a Royal Enfield Ensign bicycle. All their vehicles are authentic ex-military vehicles, originally owned by either the U.S. or foreign military forces.

“I founded Toyland Combat Vehicles in 1995, not really because I planned to – it just worked out that way,” Tom said with a laugh. “At that time I was both a military vehicle collector and a World War II reenactor. Courage Under Fire, a movie about a friendly-fire incident during the first Gulf War, was filming near El Paso. To recreate the extensive battle scenes the producers had purchased a dozen early post World War II British Centurion tanks from a collector in Australia and rebuilt them to look like M-1 Abrams.

“The regular army crews hired to operate them immediately proved to be unfamiliar with the primitive mechanics of 50-year-old armored vehicles with steering levers, crash box transmissions and 90-pound clutches.

“The producers went looking for old ex-tankers, museum volunteers and military vehicle collectors. They found all three in me and I was hired.

“The job proved to be two weeks of pure fun and no sleep, driving a 50-ton tank through fire and smoke, but without anyone actually trying to kill me. I fell in love with the filming business, so I began enlarging and tailoring my own collection of combat film vehicles to fit the needs of movie and television production.”

Other movies the Townsends’ vehicles have been showcased in include, Pearl Harbor, Olympus Has Fallen, Courage Under Fire, Secondhand Lions, Universal Soldier: The Return, Rough Riders and Harold & Kumar Escape From Guantanamo Bay.

Townsend served for five years as an artillery officer in the Arkansas National Guard right out of high school, before transferring to the Texas National Guard, where he served as a tank platoon leader.

His father served in both WWII and Korea.

Townsend said he’s pleased to be able to preserve the pieces of mechanical history he’s acquired.

“We do everything we can to preserve and maintain these pieces,” he said. “It’s an expensive process, and the movie business helps pay for that.

“It’s my way of honoring the veterans of all nations who had the courage to ride these vehicles into harm’s way and do the job they had to do.”