All under one roof: JPD and JFD to share emergency operations center 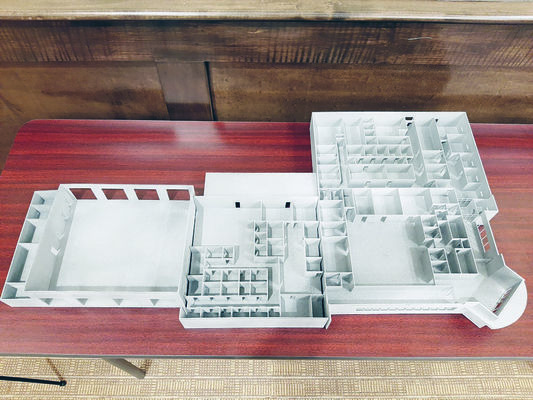 Photo by Michelle Dillon
A 3-D rendering of the proposed safety complex provided an example of how the 28,000 sq. ft. facility could be laid out. The final schematics of the complex and the completion date have not yet been finalized.

Editor’s Note: This is the final installment in a three-part series on plans the city of Jacksonville is implementing or has proposed to continue the improvement of the city, its services and its economy.

The city of Jacksonville is in the beginning stages of design for a public safety complex which will house the police department, fire department and apparatus, and an emergency operations center – a space which can also be used for training.
“Having all the entities underneath one building will give us operational improvements,” stated City Manager Greg Smith. “We’ll only have to have one generator for the building. We can have all the public safety in one location so if an individual is in need of assistance, all public safety is in one building. Those two departments [police and fire] work hand in hand daily. I can’t tell you the number of times a day, but they work very, very tightly and closely together. Our dispatch for police, fire and EMS in the same building with both responding agencies will create operational improvements instead of them being in a different building. The addition of the emergency operation center is something the city doesn’t have and will assist us if we ever get into a situation. That large room will also be a large training room that can be used for joint training between police and fire as well as individual departmental needs for police and fire and will offer the city the ability to host regional training classes for police, fire and emergency responders in a setting that is conducive to those type of classes.”

“Getting the newest technology in the building, having all the computer servers and emergency computer equipment properly installed with proper backups and battery supplies will also be a benefit to all the residents,” Smith added.

Quorum Architects, who constructed a three-dimensional scale model along with the conceptual design, has been chosen as the lead designer of the project.
No completion date of the final schematics is known at this time.

The estimated time for construction is 12-14 months, although the actual timeline cannot be known until contractors are selected and more specifics are known.

It could potentially be two years until the building is completed and ready for move-in, although the timeline could be altered either way depending upon how long it actually takes to get final plans completed, an estimate of up to sixth months was given; time to hire a contractor and weather conditions.

The total cost of the public safety complex was reported as approximately $789,000 to be paid out of the general fund and reimbursed with debt service money, most likely certificates of obligation, according to Smith.

“The process has just begun for final design, final implementation,” Smith reminds the public. “Staff, both police and fire, have made comments on the first round of floor plans. We’re going to go back and make some changes to the original conceptual design in trying to fine-tune the design to meet the needs of all the departments and the public.”