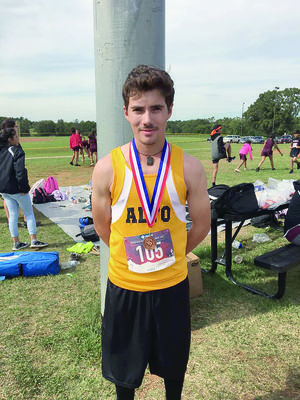 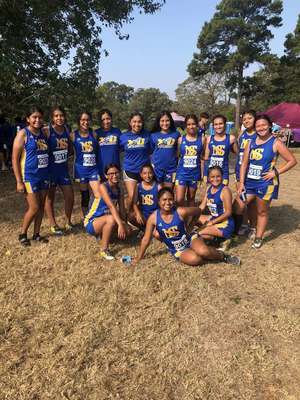 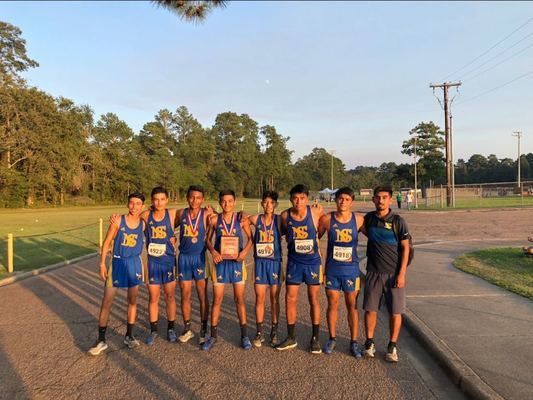 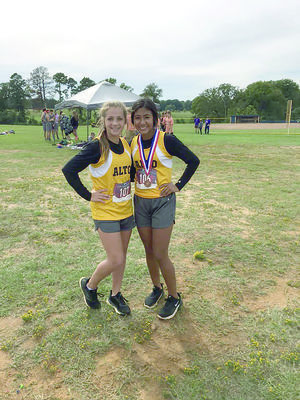 Kylee Powers (left) and Candy Castro of Alto High School participated in district cross country meet on Oct. 16. Castro finished in the top 10 and will advance to Region III Championships.
Previous Next

The junior varsity Hornets also claimed a win in their division, earning 17 points. Martinsville (43) was second. No other school had at least five runners to complete a team.

Forest Lindsey represented Alto in the varsity race, completing the course in a time of 18:40.

New Summerfield’s Jose Barcenas finished first in the junior varsity category with a time of 19:45. Alex Uribe completed the course at the 20:24 mark with Miguel Munoz (20:38) and Marco Leon (20:58) close behind. Brian Mendoza was the fifth runner on the team to cross the finish line, completing the course in a time of 21:49.

Alto’s Rand Scurlock represented the school, finishing the race in a time of 13:36.

In the women’s varsity division, Abigail Hernandez of New Summerfield secured second with a time of 14:02. Selena Torres and Stephanie Bravo were the next fastest Lady Hornets, both completing the course in 15:03. Jennifer Aguilar’s time was 15:27, and Adriana Guerrero came in at the 16:08 mark. Other runners were Maribel Zavala (16:31) and Crystal Torres (18:58).

Jenna Lindsey was the fastest runner on the Alto junior high team. She completed the course in a time of 15:25 and was followed by Juliana Gould, who had a time of 15:41. Ashley Black (19:54), Kaylie Martin (21:25) and Savana Bowman (22:43) were the other participating team members.

Alto’s Forest Lindsey and Candy Castro each finished among the top ten runners and will also advance to the Region III Championships.