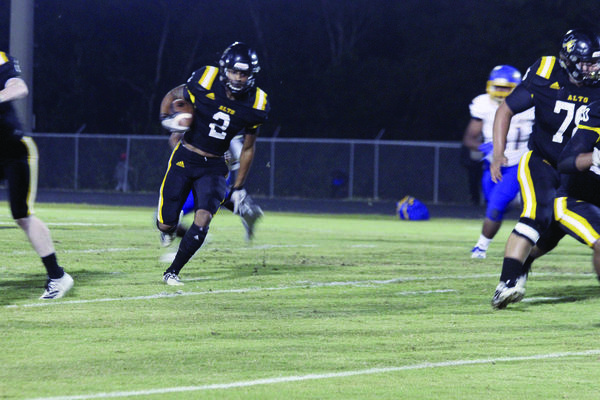 The Alto Yellowjackets continue their winning streak. They hosted Carlisle Friday, Oct. 18, defeating the Indians, 29-7. The Jackets boast an overall record of 8-0, 2-0 in district.

Alto’s offense recorded a total 365 yards, 191 rushing and 174 passing, against the Indians.

In the quarterback position, West hit receivers 11 out of 16 attempts for 174 yards, two touchdowns and a pass completion rate of 68.75 percent. Atkins caught seven aerials for 101 yards. Todd Duplichain received a single toss for 30 yards and a touchdown and a single pass to Skinner resulted in a 25-yard gain for a touchdown. High added 18 yards on two receptions.

The first score of the game almost wasn’t. Atkins recovered a fumble in the end zone for the touchdown with 2:21 remaining in the first quarter. Serrano’s kick was true and Alto held the first quarter lead, 7-0.

The most points were put on the board during the second period. With about five minutes remaining, Skinner scored on a 25-yard pass. A two-point conversion by Duplichain increased the Jacket lead to 15. Carlisle responded with a 66-yard catch and run that crossed the goal line. With a successful PAT, Carlisle was on the board but the edge belonged to Alto, 15-7. Before the halftime break, Alto would again increase the margin. On third and goal to go from the one-yard line, Skinner broke through the line for the score. Once again Serrano’s kick went through the uprights, giving Alto a 22-7 advantage at the halftime break.

The third quarter remained scoreless. In the final frame, a 30-yard pass from West to Duplichain was the only scoring play. With another successful PAT off the foot of Serrano, the Jackets won the game, 29-7.

“Through a whole football season, you’ve got to stay healthy and when you do have injuries you’re hoping they’re not season-ending or very severe, so that has played a key role,” head coach Ricky Meeks acknowledged concerning their achievements. “We definitely scout the other team and we have what we want to do, but then we’ve got to be able to execute that plan through our personal success. That’s the way we approach every day and every week and then we get to play the game at the end. Our success is always going to depend on our kids executing exactly what they’re supposed to. We can have the best game plan in the world, but if we don’t execute it, it’s not going to matter. It’s always going to be about us and perfecting our job in that way.”

Considering their undefeated record, the coach was asked how he continues to inspire the team to work hard and not become complacent.

“We still have plenty of things that we’ve got to get fixed to be the team we talk about wanting to be,” Meeks commented. “Come Monday, it’s about us. We’ve got things we’ve got to fix detail-wise. As long as we keep putting it on ourselves and worry about us, I think we’re going to be fine motivationally.”