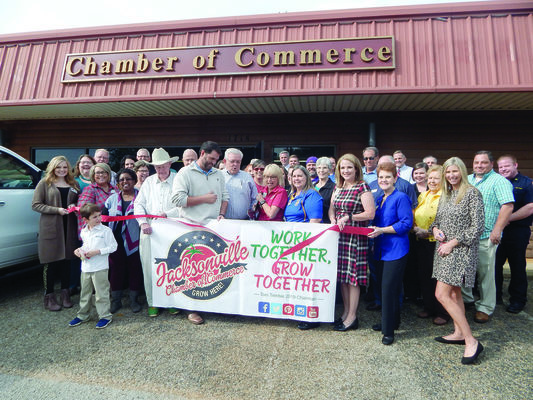 Editor’s Note: This is the first in a three-part series on plans the city of Jacksonville is implementing or has proposed to continue the improvement of the city, its services and its economy.

‘Work together – grow together,’ is more than just a catchy slogan in Jacksonville.

JEDCO, city officials and the Chamber of Commerce recently worked together to make room along the U.S. 69 corridor -- prompting the proposal of potentially moving the Jacksonville Public Library to the Norman Activity Center – and allowing the Chamber to relocate to a more spacious home.

Jacksonville’s Chamber of Commerce recently held a grand opening for its new digs on U.S. Highway 79. The Chamber’s office was located inside the Norman Activity Center on Commerce Street, in downtown Jacksonville.

Chamber President Peggy Renfro explained, “the Chamber rented office space inside the Norman Center which is a city owned building. Back in May, city officials, due to an economic development opportunity, asked the Chamber to relocate our office. We are excited about all opportunities to grow Jacksonville, so we relocated.”

Jacksonville City Manager Greg Smith said, “I want to clear up some of the confusion. We will not be relocating the library unless that building is sold. We have been contacted on the potential sale of the library building. We have been looking at alternative locations for the library, in the event that sale does go through. Right now, the leading location for the library is the Norman Activity Center.

“Nothing has been finalized or decided upon by the City Council at this time. We’re continuing looking at all our options, too.”

Smith said there was discussion in the past, even before he was hired as city manager, to look at the city’s facilities to make sure they are the best possible locations for the services they provide.

“There was nothing formally discussed,” Smith said. “But we want to make sure we’re getting the highest and best use of the spaces we are able to provide. We have a proposal for a better use of the library’s location – that’s not to say there’s anything wrong with the building or the location itself. If the library does move, it’ll be based off of whether its current location could be more beneficial for a different user.”

Smith said city officials are not able to discuss what may move onto the library’s location at this time.

“The Chamber opted to go ahead and seek out a new location for their offices,” Smith said. “Of course we support their decision and they’ve got a very nice, new office.”

“Looking at various options, we decided the best location for the Chamber was the former Taylor’s Western Wear building at 1714 E. Rusk St. The space allowed us to create an open office floor plan and create a meeting area to accommodate 30. The storage room and extra bonus meeting room fit our needs for the Chamber.

“Now we are located on a major highway, have lots of open space, two meeting areas and storage -- it is the perfect place at the perfect rate for the Chamber to determine where our permanent home will be located.”

“The move went better than planned,” Renfroe said. We’d especially like to thank the Jacksonville College Women’s Basketball team and JC President Dr. Mike Smith-Jacksonville; Harry’s Building Materials; Billy Bateman and Highway 69 Mission; and Tom Trimble and Pam Anderson – they were all a great help getting us all moved!”

With city personnel taking a more prominent role in tourism for Jacksonville, it has also allowed the Chamber to re-evaluate the Chamber programs.

“The Chamber will be focusing on our businesses in Jacksonville and supporting our wonderful community throughout the year,” Renfroe said. “The Chamber will continue to organize the Tomato Fest in June. The Chamber Board will host a Retreat in December, to discuss programs to benefit the members of the Chamber.

“The Chamber works with Jacksonville Economic Development Corporation, Jacksonville ISD, city of Jacksonville and the county to benefit our community and its members. You could say we are the cheerleaders and information center for Jacksonville.”

Being a member of the Jacksonville Chamber of Commerce provides networking opportunities, new business contacts, referrals, community involvement and support, marketing opportunities and increased credibility. Check out www.JacksonvilleTexas.com and follow them on Facebook www.Facebook.com/JacksonvilleChamber.