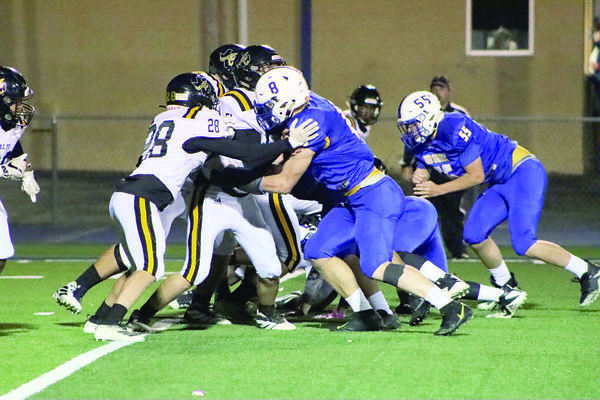 The Alto Yellowjackets opened their district slate with a win over the Wildcats at Big Sandy, 41-14.

The Jackets totaled 430 offensive yards, while holding the Wildcats to a mere 41 yards.

Leading rusher against the Wildcats was Vi’Dareous High who gained 123 yards on nine carries, including touchdowns of four and 54 yards. Aaron Skinner recorded 44 yards on 11 runs, including two touchdowns from one and seven yards out. Atkins gained 36 yards on two hauls. Warren added a 36-yard run to the team total.

The Alto defense allowed only two pass completions for 17 yards and 24 yards on 40 rushing attempts.

The single first-quarter score was a one-yard run by Skinner.

Alto led 6-0 going into the second quarter, but Big Sandy responded with a touchdown and successful point after kick. The Wildcats were in the lead for the first and last time of the game. Alto would respond by handing the ball to High for a four-yard touchdown. With the two point conversion on the quarterback keeper, the Jackets led 14-7. Unfortunately, Big Sandy would return the kickoff for a 60-yard touchdown and the extra point kick tied the score, 14-all. The Wildcats would not cross the goal line again, but Alto would score twice more before the half. A seven-yard run by Skinner and an 18-yard pass to Duplichain, along with the two-point conversion by Duplichain, put the Jackets up 28-14 by the halftime break.

The lone third period touchdown was a 54-yard run by High. The extra kick by Serrano was good, expanding the Jackets’ lead to 35-14. West found Pope on a 60-yard aerial for the final score of the game.