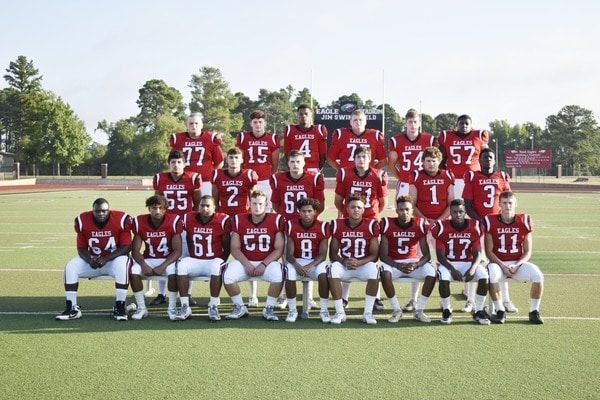 Eagles fans went into bye week with a sense of déjà-vu, but if history is set to repeat itself, fans better buckle up because they are going to be in for a wild ride. The Eagles ended their 2019 regular season play with a 0-6 record; however, that is the same stats the team showed going into their district run last year and they were undefeated, ending the season as bi-district champs.

Coach Hancock has a history for putting together challenging non-district schedules to put his players up against strong teams to help prepare them for playoffs in the later part of the season.
“The early season games are important to bring the team together for their district run,” Hancock said during a pre-season interview. “I pick the schedule to be tough for a reason. It’s about exposing any weakness that you can build on and make yourself better. You have wins and you have setbacks, life is like that. The key is to never go in with the mindset this game is unattainable.”

Rusk has made some big plays during regular season; some long rushing touchdowns, noteworthy tackles, interceptions and passes. The team is able to boast about going into the district run with the returning district offensive MVP, Jay Hall, along with some other notable players.

“We can expect big things from seniors Sean Rogers and Jaden Rushing in district,” said Hancock. “You have Jaheim Upshaw, Ryan Reynolds and Nick Acker as big contributors on the offensive and defensive lines. Plus Joseph McGowan is the leading receiver for the Eagles, as well as a safety.”

The Eagles have averaged 18.3 points per game during regular season, scoring points consistently over all four quarters. This is something that will come as an advantage as several teams they face tend to rack up the majority of their points in one half.

The Eagles will travel to the northern side of the county on Friday, Oct. 18 to play their first district game as they take on the Bullard Panthers. The Panthers currently have a 2-5 record overall and they are 1-0 in district. The Panthers played the Wills Point Tigers on Friday night at Wills Point, and secured their first district win with 21-16 victory. The Panthers average 23.6 points per game, but they are strongest in the first half statistically. The Panthers have also yet to win a home game, and the Eagles are hoping to continue that streak. Last season, the Eagle’s highest scoring game was against Bullard, with Rusk racking up 49 points to Bullard’s 12.

Rusk will play at home Oct. 25 as they take on the Brownsboro Bears. The Bears are currently sitting at a 1-6 overall record and 0-1 in district. The Bears have the highest average points per game out of all the teams the Eagles are set to face during district play at 27.3 points per game. To date, the Bears have showed consistent scoring across all four quarters, so the Eagles are going to need to keep their momentum up. In 2018, the Eagles beat the Bears by two touchdowns and a score of 28-14.

Rusk will kick off the month of November travelling to Canton on the 1st as they battle the Eagles. Canton has a 2-5 overall record and 1-0 district. Canton secured their first district win on Oct. 11 against the Brownsboro Bears, winning the game with a score of 35-27. Canton has averaged 22.4 points per game this season, with the majority of those points coming in the second half of game play. In 2018, Rusk ended their game against Canton with a 20 point lead and a final score of 48-28.

On November 8 the Eagles will host Wills Point Tigers at Swink Field. Wills Point’s current record is 3-4 overall and 0-1 district. The Tigers, like the Eagles, show consistent scoring across all four quarters with an average game score of 19.9. Last season, the Eagles beat the Tigers 48-6.

Texas Football predicted we would see Rusk in the playoffs out of District 7-4A Div. II. The publication went on to pick Rusk as finishing first, followed by Wills Point, Bullard, Brownsboro and finally Canton.