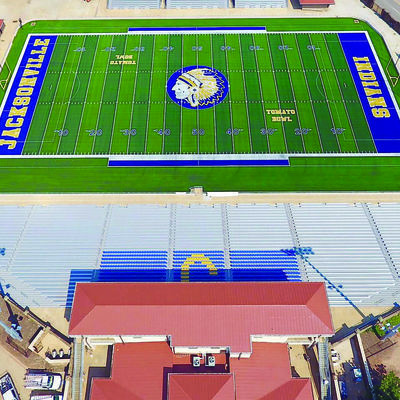 The Jacksonville Fightin’ Indians travelled to face the Pine Tree Pirates last Friday desperately seeking a win to keep pace in the District 9-5A-Division II race. For 24 minutes, the Tribe hung with the Piratess, and it appeared as if the visitors might steal one from the offensively potent Pine Tree squad. However, the Pirate attack, which relied almost exclusively on quarterback DJ Freeman and running back Tyler Sheffield, really got rolling in the second half and pulled away from Jacksonville to win, 42-25.

It was the Tribe who got the scoring started, as junior quarterback Patrick Clater took a read-option keeper nine yards for the score about two minutes before the end of the first quarter of play. Unfortunately for the Indians, the extra point attempt by Alejandro Pina-Sanchez was unsuccessful.

Freeman then took over and showcased the quick hitting ability of the Pirate offense, hitting receiver Gabe Adams for a big 45-yard score at the 0:52 mark of the first quarter. With the extra point, Pine Tree took the lead, 7-6.

Clater was able to answer the Pine Tree score by hooking up with one of his favorite receivers, senior Chris Carpenter, for a go-ahead touchdown with 1:25 remaining in the first half. This time Pina-Sanchez’s boot was true and the Tribe seemed to be heading for the halftime locker room with a lead.

However, if Indian fans learned anything about the Pirates on Friday night, it was that the offense could strike at any time. To further drive that point home, Freeman connected with University of Arkansas commit JJ Sparkman for a touchdown from 19 yards out with only twelve seconds remaining in the half. The extra point staked the home team to a lead they would not give up for the rest of the contest.

The second half was the Freeman and Sheffield show. Both PTHS stars showcased their running ability as the Bucs pulled away. Sheffield dove in from a yard out about three minutes into the third quarter and then Freeman followed with a three yard burst of his own. By the time Clater hit Jaylon Freeney for a 30-yard score at the 4:26 mark of the third, the Pirates had seized momentum. A failed two-point conversion attempt left the score at 28-19 in favor of the home side.

Freeman added yet another TD run as time expired in the third quarter and it was smooth sailing the rest of the way. Clater would uncork another deep touchdown strike to Bryson Tatum from 22 yards out at the 8:23 mark of the final stanza. Pina-Sanchez split the uprights and J’ville trailed by ten, 35-25.

The exclamation point on the Pine Tree victory was provided, unsurprisingly, by Sheffield. His seven-yard tally sent the Pirates to 3-0 in district play while dropping Jacksonville to 0-3 and putting postseason play further in jeopardy for Wayne Coleman and his Tribe.

If the Indians are to rebound, they’ll have to do it against the preseason favorites to claim the district crown, the Marshall Mavericks. The Mavs come calling at the historic Tomato Bowl on Friday night. Tribe fans can listen to all the action beginning at 6:45 on JHS-Sports.com.