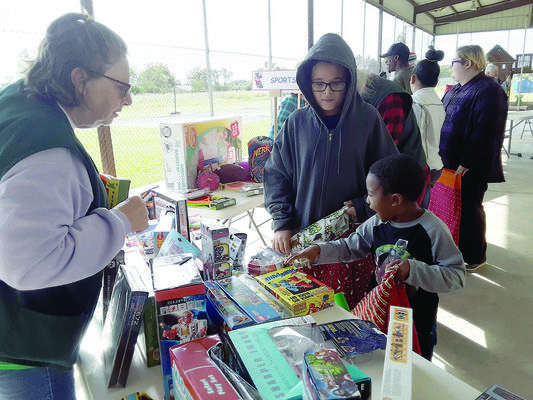 Photo by Cristin Parker One Alto boy gets excited about his choices during the Convoy of Toys, brought to the city of Alto’s youth by the Lone Star Santas last weekend. The event was held at The River Church for families affected by April’s tornadoes. 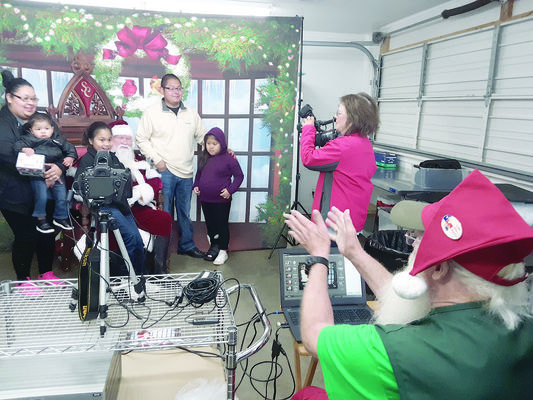 It’s still seems a mite early for letters to Santa yet, but ol’ St. Nick got the word the city of Alto needed a bit of Christmas cheer.

A total of 33 Santas, Mrs. Clauses and elves from the Lone Star Santas converged on The River Church in Alto, early Saturday, Oct. 12, bringing the organization’s Convoy of Toys to all the girls and boys who were affected by the tornadoes that swept through the city of Alto and the southern end of Cherokee County in April this year.

Alto second grader Ziyan Tyra explained her choice of a plush horse, nearly as big as she is, “I love horses and this one’s pretty.”

When asked what she’d like to tell the Santas that helped her during the event, she simply replied, “Thank you!”

Alto eighth grader Dayton Bozeman and his brother, seventh-grader Keegan, both agreed, and said, “This is really cool!”

Dad Derek Bozeman explained, “We had a tree put a hole in our roof – not fun, but our neighbors lost a lot more. We’re still making it and we’re very grateful for that.”

Alto resident Marga Johnson, who attended Saturday’s event with her grandchildren, said, “We lost everything. We got out with only the clothes on our backs that day. It’s been difficult but we’re coming through it, with the help and love from our neighbors and community. Like this, today – it really means so much.”

Alto families were invited to Saturday’s event to make sure those who continue to recover from April’s storms benefitted from the spirit of the event.

“When the tornado in Joplin, Missouri, happened in 2011, we saw the opportunity to reach out to children and families affected by natural district,” former Lone Star Santas Director ‘Santa’ Jim Fletcher said. “Everyone here is a volunteer who has covered his or her own expenses to be here today.

“And that’s exactly why we do what we do,” Fletcher said, pointing out the beaming faces of several small Alto children as they chose their very own toy from the plethora of donated toys, games, books and more.

According to the organization’s website, Lone Star Santas® is the largest regional/statewide Santa organization in the world. “We are 501(c)(3) non-profit organization of men and women who live in or work in and around Texas, and portray Santa Claus, Mrs. Claus, elves and helpers,” the website states. “Something that sets us apart from any other Santa organiza-tion, is our Convoy of Toys®. We bring a sense of love, hope and joy back to children affected in natural disasters.”

‘Santa’ Davis Stanley, of Nacogdoches, added, “We want to thank The River Church and everyone who helped us get this to-gether.”