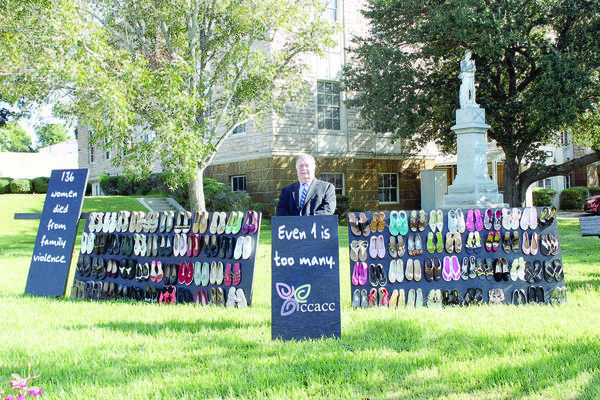 Courtesy photo
Cherokee County Judge Chris Davis peruses the mobile exhibit currently set up on the courthouse lawn in Rusk. The exhibit highlights the state’s domestic violence epidemic, as reported by the Crisis Center of Anderson and Cherokee Counties.

RUSK -- Receiving Cherokee County Judge Chris Davis’ support, the Crisis Center of Anderson and Cherokee Counties’ (CCACC) mobile exhibit claimed a spot on the courthouse lawn last week.
In recognition of Domestic Violence Awareness Month, the CCACC constructed a 6-panel display of 136 pairs of women’s shoes representing the number of women who died in Texas in 2017 from family violence.

That number has actually increased to 174 killed in 2018, according to the latest Honoring Texas Victims Report released by the Texas Council on Family Violence (TCFV) shortly after the exhibit launched last week.

The purpose of the display is not only to respectfully acknowledge the lives lost, but also to honor the families and friends that were left behind, according to Stephanie Fleharty, Community Education Director for the CCACC. “We hope it gets people talking. We want to bring attention to the issues surrounding domestic violence and encourage people to learn the warning signs of abuse and to have courage to reach out to those who may be suffering in an abusive relationship.”

“It’s a major issue throughout our state and nation, and even right here in our own neighborhoods. And it’s an issue we can’t combat alone. We need the help of the community…through donations, through volunteerism, and through a willingness to have conversations about the issue,” said Fleharty. “The mobile exhibit is just one vehicle that can help start those conversations.”

“It’s been awhile since we’ve made a ‘big splash’ in the community,” said CCACC Executive Director Roger Pharr. “We’re hoping the display will make a big enough statement to get people interested and get them talking.”

The mobile exhibit will remain on the courthouse lawn for one week, leading up to Rusk’s Fair on the Square. It will then spend a week in front of Dairy Queen in Palestine, be moved to UT Health in Jacksonville for the following week, and conclude its tour at Jacksonville College for the last week in October.

To help spread awareness, visitors are encouraged to share photos of the display on their social media with the hashtag #DVAM for Domestic Violence Awareness Month.

“We want to be sure to thank everyone who helped with the assembly, painting, and movement of the display,” said Fleharty. “We couldn’t have done this without the support of all who donated shoes, supplies, time, and energy to the project. CCACC board member Walter Chaffin, along with volunteers Eric Rose and Melanie Maddox, put their construction and painting skills to good use. Our very own John Thomason helped with securing the shoes, applying the vinyl, and getting it from place to place.”

All materials for construction of the display were generously provided by McCoy’s Building Supplies of Palestine.

For more information on domestic violence or the CCACC, visit mycrisiscenter.com.

The Crisis Center of Anderson and Cherokee Counties is a 501(c)3 organization. All donations are tax deductible.

The Crisis Center of Anderson and Cherokee Counties will be hosting two volunteer trainings, October 22, 2019 and October 24, 2019, from 5:30pm-7:30pm. Both trainings will be held at 700 East Cherokee Street in Jacksonville.

Individuals with a desire to join the Crisis Response Team (CRT) in Cherokee County will be trained to provide on-site advocacy to survivors of domestic violence and sexual assault.

The CRT works together with law enforcement, local hospitals, the DA’s office, and other community partners to ensure the coordination of care for domestic violence and sexual assault survivors and the investigation of their cases.

“Our goal is to ensure the organization of a consistent, respectful, victim-centered response to domestic violence and sexual violence in Cherokee county and to counter the survivor’s experience of abuse with a sensitive and complete advocacy response,” stated Tara Scheler, Community Educator for the Crisis Center.

Wendy Hammons, Crisis Center CRT Coordinator added, “We are here to support the survivor’s well-being and to encourage those who work to bring the perpetrators to justice.”

Victims of domestic violence and sexual assault who receive advocacy are more likely to leave their current situation and seek justice through the court.

Volunteers are needed to deliver efficient advocacy and crisis intervention at hospitals or local law enforcement offices. They will also provide resources to survivors through this collaborative effort.

All necessary resources are provided at the training on October 22nd or October 24th from 5:30pm-7:30pm.