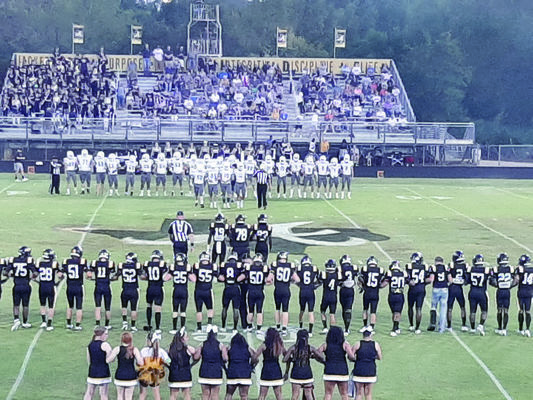 The Alto Yellowjackets completed their non-conference schedule with a perfect 5-0 record. The team had a bye Friday, Oct. 4, and will begin their District 10-2A slate Friday, Oct. 11. Kickoff against the Big Sandy Wildcats (1-3) is set for 7:30 p.m. at Wildcat Stadium.

Alto earned important wins over Corrigan-Camden (40-15) and Garrison (35-21), the only two teams to defeat the Jackets during the regular season last year. Garrison is also the team which crushed any state title hopes Alto had last year by defeating the Jackets in the area round playoff game.

This season, the Jackets have limited their five opponents to 44 points. At the same time, Alto has put 189 points on the board, averaging 37.8 per game versus the 8.8-yard average allowed.

The team has developed both their aerial and running games, making them a formidable opponent.

Senior Harmon West has proven his ability on both sides of the ball. In the most recent outing against Corrigan-Camden, West posted 11 tackles, one sack, one caused fumble, a blocked kick and one interception. As quarterback, he has a pass completion rate for the season of 55.68 percent, hitting receivers 49 times in 88 attempts.

With their non-conference games resulting in a perfect 5-0 record, including wins over Garrison and Corrigan-Camden, the two teams who beat the Jackets last year, Alto players can move into district play with confidence.

“Any type of victory will do that,” said head coach Ricky Meeks. “The kids are playing with a lot of confidence and playing within the system, how they’ve been coached. They’re trusting one another.”

“Every team will present a challenge,” Meeks observed. “We don’t think of one more than another; we play in a very tough district. We focus on us every single day and keep preparing that way.”

The broadcast of the game can be heard on the radio at 103.3 FM or online at 103thebull.com.