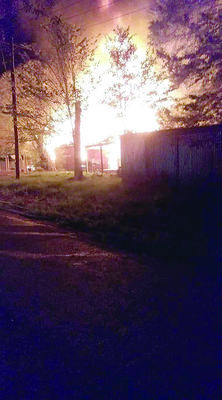 Courtesy photo Flames engulf a home in Rusk during the early morning hours of Thursday, Oct. 3. 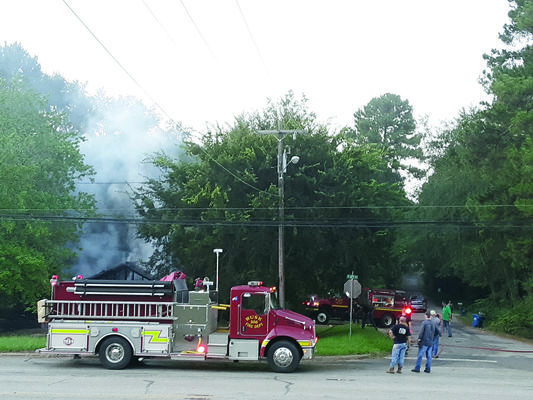 Photo by Cristin Parker Rusk firefighters continue monitoring the scene of a house fire on U.S. Hwy. 84 in Rusk last week.
Previous Next

An early morning house fire on Thursday, Oct. 3, has left one Rusk family without.

“It was crazy,” neighbor Lezlie Cavell said. “I woke up to the whole house rumbling and hearing sounds like shots being fired. I couldn’t figure it out – I even turned the AC off so I could hear better.

“When I looked out, their house was just one wall of flame. Of course, I called 9-1-1 immediately.”

Meanwhile, Cavell wasn’t the only one springing into action.

“It was the dogs that woke me up,” said Freddie Guthrie, who said he’d lived in the rent house since before 2017. “They were in the bed with me and starting licking and pawing at my face. I woke up and there was just all this black smoke filling up my room. I scooped the dogs up and left. As I walked out the front door, the flames were shooting out the windows.”

Guthrie and family members, Truett Worrell and an unidentified woman, all escaped the home without injury, along with their three adult dogs. A litter of five puppies were lost in the fire.

Worrell, who said he’d lived at the residence for about three months, said, “We literally had seconds. It’s a miracle of God.”

The family’s landlord, Jimmie Isaacs, has rehomed the family into another rent property in Rusk, but the trio are without basic necessities, including medication, glasses, clothing and general household items.

Family member Monica Lockhart posted on the All Things Rusk TX! Facebook page, “Thank the Lord my sister, brother and brother-in-law were able to escape the fire. They lost everything they owned. They need help with clothing and everything.

Rusk Fire Department officials continue to investigate the cause of the blaze.