'Jackets take bite out of Bulldogs 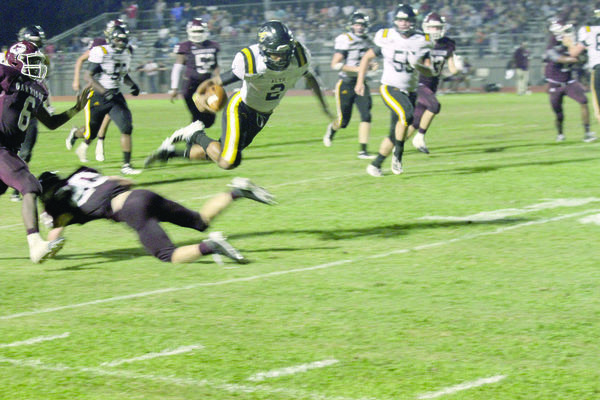 The Alto Yellowjackets continue adding to the win column, now 4-0, after visiting Garrison to defeat the Bulldogs, 26-7.

“Defensively, we’re playing really well right now,” Head Coach Ricky Meeks stated in a post-game interview with Fox Sports. “They’re taking it personal and it’s showing. We’ve had the last two games, shutouts, and then tonight we gave up seven points… Kids are buying in and rising up to what we’re asking them to do.”

As quarterback, West completed seven of 16 pass attempts for 159 yards. Skyler Atkins caught three passes for 73 yards. The two aerials to Marlon Warren were good for 51 yards. Aaron Skinner’s single reception was for 32 yards and Pope caught a pass for three yards.

The team posted 141 yards rushing and 159 passing for a total of 300 offensive yards. The yardage was down from the previous week’s 489, but it was enough to get the job done.

“It’s going to increase the confidence with our kids,” Meeks stated of the win in the interview, noting the team lost to Garrison twice last year. “We play in a very tough region and hopefully this brings us up there with some of the other teams, with San Augustine and Garrison and Joaquin and Tenaha and Carlisle, who’s in our district. I think that’s just going to boost our kids’ confidence even a little bit more.”

The game clock ticked down almost halfway through the first period before either team scored. Unfortunately for Alto, the Bulldogs were the first to cross the goal line. It would, however, be Garrison’s only time to score. A two-yard run and successful PAT put Garrison on the board, 7-0. With less than two minutes in the quarter, Skinner found the end zone on a five-yard run for the Jackets. The kick by Angel Serrano went wide, leaving Garrison with the first quarter lead, 7-6.

The remainder of the game belonged to Alto. Both second quarter scores came from single-yard runs by West. With one of the extra-point kicks going through the uprights, the Jackets had a 19-7 lead at the halftime break.

Neither team was able to add any points during the third quarter.

The lone touchdown of the fourth quarter was scored on a two-yard run by West. After a Garrison punt placed Alto on the Bulldog’s 25-yard line and a few handoffs to High, the Jackets were in position for the quarterback keeper that scored. Serrano’s kick was good, giving Alto the 26-7 win.

“It’s going to be a challenge, week in and week out,” Meeks said in the interview when asked about the upcoming district schedule. “We’ve got some really good teams in our district. There’s definitely no off week. We’ve still got to take it one day at a time and keep worrying about us and that’s just kind of what we talk to the kids about each day and that’s the approach we have to take.”

The Yellowjackets (4-0) will complete their non-conference schedule Friday, Sept. 27, when they visit Corrigan where they will take on the Corrigan-Camden Bulldogs (4-1). The team will have a bye the following week before beginning district play at Big Sandy, currently 1-3, Friday, Oct. 11.

The district has posted the full Fox Sports interview with Meeks on its Facebook page, Alto ISD.
The video can also be found online at www.foxsports.com/southwest/video/1606721603717.