Eagles fall to the Panthers 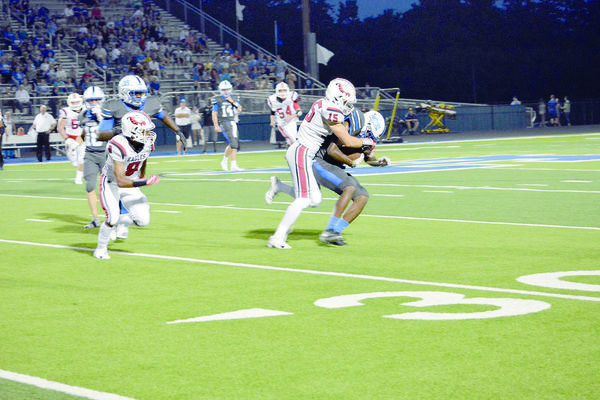 The Rusk Eagles traveled to Longview on Friday night to take on the Spring Hill Panthers. The Eagles went into Friday night’s game with a 0-3 record and Spring Hill was looking at a 1-3 season record to date.

With seven minutes left in the first quarter, Spring Hill completed a 52-yard touchdown pass, followed by a rushed two point conversion, putting the first eight points of the game on the scoreboard. Despite efforts by both teams to run the ball down the field, the first quarter ended without either team completing the trek across the plane to add any additional points.

The second quarter was a back and forth match between the Eagles and Panthers as each struggled to complete downs and make their way into the Red Zone. With less than a minute left, Spring Hill made it to the Rusk 3-yard line and were able to complete a rush to the end zone, marking their second touchdown of the night.
The last minute of the first half showed fast paced game play with the Eagles making it the Spring Hill 38-yard line before turning over possession on downs, with Spring Hill taking possession on their own 49-yard line.

With the next play, Rusk #15 Sean Rogers intercepted a Spring Hill pass and gained control of the ball on their own 40-yard line just as the game clock ran out. The score going into halftime was 0-14, in favor of the Panthers.

The second half of the game began with the Eagles in control of the ball, but with nine minutes to go in the third quarter, Rusk turned over possession with the Panthers gaining control on the Rusk 8-yard line.

The Panthers took advantage of their position so close to the end zone, rushing for their third touchdown of the game. A failed two point conversion left the score 0-20.

Rusk gained control on their own 34-yard line following a Spring Hill kick off. A long pass from #4 Jaylon Hall to Rogers secured the down and set the Eagles up for their first touchdown of the night. A 20-yard pass from #5 Joseph McGowan to #1 Landon Gates with just six minutes left in the third quarter put the Eagles on the scoreboard. The Eagles were unable to complete a rushing two point conversion, leaving the score at 6-20.

Rusk will host the Henderson Lions on Sept. 27 at Jim Swink field with game play beginning at 7:30 p.m. The Lions are 2-1 for the season.