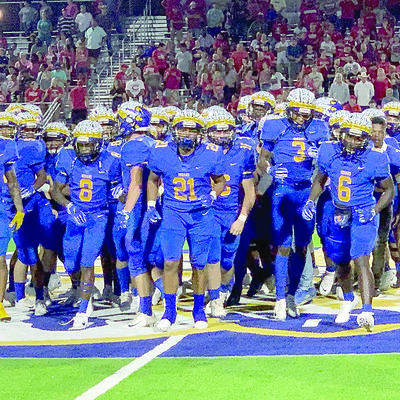 JACKSONVILLE – The Jacksonville Fightin’ Indians hoped to ride the momentum of their thrilling Week 2 comeback victory against Palestine to a Homecoming triumph over Highway 79 East rival Henderson.

The Lions had other plans, however, using a run-heavy offense to pull away from the Tribe in the second half and spoil the festivities with a 67-40 triumph.

The evening started off promisingly for Jacksonville as senior wide receiver Chris Carpenter (fresh off of a huge game in Palestine for which he garnered both statewide and local Player of the Week honors) was named Homecoming King in a pregame ceremony. The Queen’s crown went to senior Fightin’ Maidens soccer star Brandi Diaz.

Henderson would take early strides to dampen the home crowd’s enthusiasm as Lions running back Kevin Fields bolted 24 yards for the opening touchdown at the 7:46 mark of the first quarter. The extra point failed.

Carpenter’s big week would continue in unexpected fashion when he took a pitch on a reverse from Tribe QB Patrick Clater and threw deep to fellow wideout and speedster Jaylon Freeney for a score with 5:10 to go in the first. Senior kicker Alejandro Pina-Sanchez added the PAT to put Jacksonville in front for the first and only time in the contest.

The Lions’ rushing attack was multi-faceted all night but was definitely anchored by senior quarterback Caleb Medford. The standout signal-caller flashed his speed to tally again for the Lions before the end of the first quarter. The 16-yard score was converted by kicker Enrique Garza.

Henderson’s defense would hold the Indians on the first possession of the second quarter before Medford got in on the scoring again – this time uncorking a 37-yard strike through the air to J-Aaron Fuller. Garza added the PAT at the 11:39 mark of the second and the visitors appeared to have seized momentum.

Not to be outdone, Clater hit Carpenter with a nine-yard touchdown pass to keep the home team in the thick of things. Pina-Sanchez added the point after to make it 20-14 with 6:58 to go. The scoring would keep coming, as fans at the historic Tomato Bowl were treated to an offensive spectacle.

The Lions would find the endzone once more before the half as would the Tribe. JHS senior running back Aaron Richardson capped a wild first half with a two-yard TD plunge just 44 seconds before the halftime buzzer sounded. Unfortunately for the Tribe, Pina-Sanchez had a rare PAT miss, leaving the score at 27-20. Henderson would tally three more points right before time expired as Garza split the uprights from 31 yards out.

Clater would add to his passing stats when he found Tyress Gipson to open the second half scoring with an 18-yarder. Fields would strike again for the Lions before Clater answered with an absolute gem – hitting Freeney who streaked in for the 71 yard touchdown with 7:02 to go in the third. Pina-Sanchez booted true and the Tribe got as close as they would be for the rest of the night, down only 37-34.

Jacksonville was unable to stop the Red and Blue’s offensive onslaught from that point. Although Richardson crossed the goal line again, the fact that the Lions forced Clater into a safety, combined with their relentless ground game doomed the home team.

Jacksonville now heads into their bye week with plenty to work on before heading to Nacogdoches for the District 9-5A-II opener on Sept. 27. The Indians should be able to get most of their players back to a clean bill of health and sharpen their tackling before matching up with the Dragons. Nacogdoches dropped a close contest to Class 6A Tyler Lee by a score of 35-28 last Friday night.