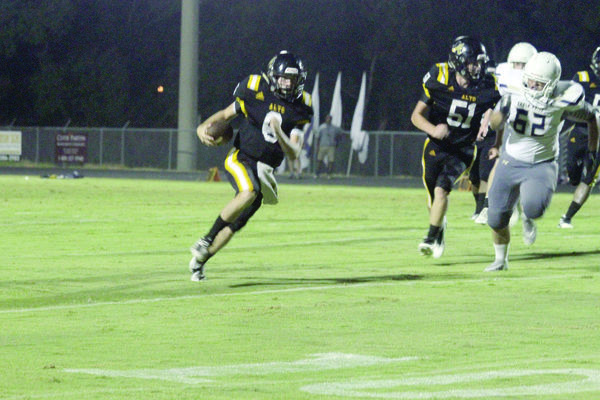 ALTO -- Alto’s mean sting was felt by New Diana Friday night on Cam’ron Matthews field as the Yellowjackets shutout the Eagles, 50-0, for their homecoming romp.

The offense continued to improve its accumulation of yardage, garnering a total 489 yards.
Vi’Dareous High was the go-to running back with 19 carries for 124 yards and one touchdown. Will Dixon’s lone carry added a touchdown on a 15-yard run. Aaron Skinner rushed for 38 yards on eight attempts, putting another touchdown on the scoreboard. Je’Darious Bolton was instrumental in the second half, adding 46 yards on six carries.

The greatest number of yards on a single play was Skyler Atkins’ kickoff return of 73 yards for a touchdown.

Pass completions accounted for 234 of the total 489 offensive yards. Harmon West made 12 of 16 attempts for a 75 percent completion rate. His longest pass was 39 yards to Skyler Atkins. Will Dixon completed both of his two attempts for a 100 percent rate.

Neither team was able to score in the first quarter, although the period ending with Alto in possession of the ball.

“Sometimes early in a game, maybe we get a few things differently than what we think we’re going to see,” Head Coach Ricky Meeks said of the slow start. “Our kids did a great job staying within the system and doing what they’ve been coached to do. We make adjustments on the sideline and then we go attack that way. I thought they did a good job of not panicking and continuing to do things that they’ve been coached to do.”

The second quarter opened with the Jackets on the Eagles’ 31-yard line, but they were unable to put it into the end zone. Forcing New Diana to punt, Alto regained possession of the ball at the Eagle’s 12-yard line due to a dropped ball before the punt. The second handoff to Aaron Skinner put him across the goal line from nine yards out. With the kick between the uprights from Julio Serrano, Alto was on the board, 7-0.

On New Diana’s first down following the kickoff, Alto’s Irvin intercepted the ball. Regaining control on the Eagle 22, the Jackets converted the turnover into points with a 35-yard catch and run by Jay Pope. Another successful PAT and Alto increased their lead, 14-0.

The next possession by the Jackets also proved fruitful as they drove 56 yards, culminating in a 25-yard touchdown pass to Pope. The two-point conversion failed, but the Jackets carried a 20-0 lead with 4:55 remaining in the half.
Alto was eventually forced to punt on their next possession, but the kick was stopped on the one-yard line. The poor field position of the Eagles allowed Duplichain to get the safety with the assistance of Hall, adding two more points to the Jackets’ score. On the New Diana kickoff following the safety, Atkins returned the ball 73 yards for a touchdown as the buzzer sounded the end of the half. Serrano’s kick was good, upping the score.

Despite being plagued with penalties during the second half, many self-inflicted, Alto led 29-0 at the break.

“We’ve got to do a better job of keeping our cool on some things, but sometimes those things happen in the course of a game,” Meeks commented. “We’ll address them and get them corrected and we’ll go from there, but I’m extremely proud of the intensity and the way the kids played.”

The single score in the third period was a 15-yard touchdown pass to Atkins with 3:09 in the period. With the two-point conversion by Duplichain, Alto again increased their lead, 37-0.

In the final frame, Alto scored twice more on running plays. High crossed the goal from six yards out and Dixon from the 15. With the first PAT failing and the second successful, the game ended with an Alto 50-0 win.

The three wins in a row for the Jackets won’t result in coaches allowing the team to slack off.

“This is now behind us,” Meeks stated. “They’re going to enjoy it tonight, but we’re back to work tomorrow. It’s one day at a time. It’s always about us, controlling us. It’s not about who we play or where we going. It’s just about doing the things we know to do to be successful, so we’ll keep them on that track and we’ll keep progressing through the season.”