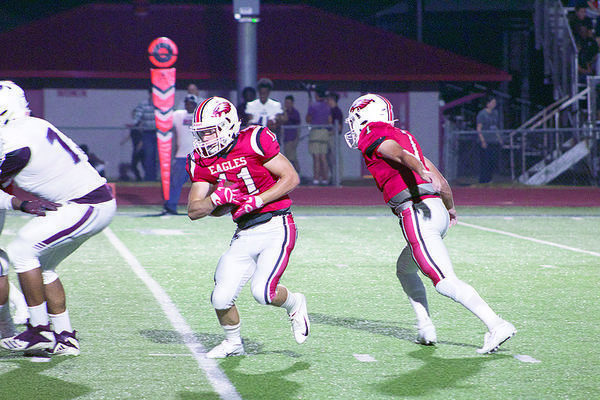 It was a hot, dry night at Jim Swink Field with the jingling of homecoming mum bells filling the air as the Rusk Eagles took on the Palestine Wildcats Friday night. Palestine and Rusk both entered the game with a 0-2 record, both vying for the first win of the season.

The first half of the game was back and forth like a tennis match, with neither team making it to the end zone until the second quarter.

To start the night, Rusk kicked off to Palestine and the Wildcats made quick work of the first four downs, moving the ball to their own 27-yard line before a tackle from Eagle #2 Brennen Lucien completed a tackle for a loss.

With 10 minutes to go in the first quarter, Rusk turned possession over on downs, giving the Wildcats control of the ball on their own 7-yard line. Despite their best attempt, the Wildcats failed to make it to the end zone and punted to Rusk with five minutes of game play left on the clock for the first quarter.

Palestine’s M. Thompson intercepted the ball as the Eagles were attempting to complete their fourth down, giving the Wildcats possession on their 46-yard line.

As the two minute warning sounded, possession once again turned over on downs, with the Eagles gaining control on their own 39-yard line. Rusk’s attempts to move the ball to the end zone were unsuccessful, resulting in the Eagles punting to the Wildcats with less than a minute on the clock for the first quarter. The quarter ended with a 0-0 score.

The second quarter started off with a bang as the Wildcats scored the first touchdown. With nine minutes left to go, Palestine completed a 11-yard rushing touchdown, which would end up being their only trip to the end zone for the rest of quarter. The PAT was missed and the Wildcats kicked off to the Eagles.

The Eagles immediately answered back with a 7-yard rushing touchdown by #1 Landon Gates. A failed two-point conversion left the score tied 6-6 with eight minutes left in the first half of the game.

The Wildcats made a valiant attempt to make their way into the end zone, but a missed field goal and turnover on downs gave Rusk possession of the ball. A long pass from Gates to #3 Isiah Ward moved the ball to the Palestine 46-yard line, starting a string of plays that set the Eagles up for their second touchdown of the night.

The Eagles went into halftime with an eight-point lead and a score of 14-6.

The Wildcats didn’t waste any time catching up as the second half of game play began. With nine minutes left in the third quarter, Wildcat Jeremiah Davis completed a 60-yard rushing touchdown. A failed two-point conversion attempt left the score 14-12, in favor of the Eagles.

The Wildcats added eight more points to their score with Davis completing a 2-yard rushing touchdown and a completed two-point conversion. Game score was 14-20, in favor of Palestine.

With less than a minute left in the third quarter, Rusk punted to Palestine and the Wildcats ran 90-yards, scoring their third touchdown of the night. A failed two-point conversion left the Wildcats with a 12 point lead over the Eagles.

The third quarter ended with a score of 14-26, Palestine lead.

The forth quarter started off slow, with neither team scoring until there were only four minutes left in the game. Palestine would go on to complete a 45-yard passing touchdown, bringing their score up to 32 points. Unfortunately the Eagles were not able to make their way across the plane the second half of the game, ending the night with a 14-32 score, Wildcat win.

The Eagles will travel to Longview on Sept. 20 to take on the 1-2 Spring Hill Panthers. The Panthers have yet to win a home game, securing their only win against the XXXX. Both teams have similar average scores in the first half of the game. To put their first win of the season under their belt, Rusk is going to have to pull through in the second half as the Panthers have shown to be slightly stronger in the second half than the Eagles.