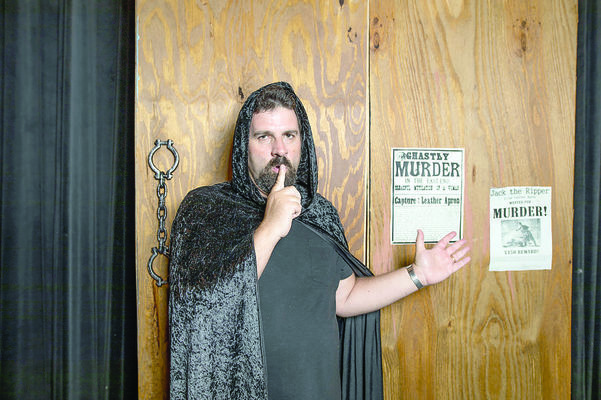 Just in time to get its community in a Halloween-y kind of mood -- Cherokee Civic Theatre presents Jack the Ripper, Monster of Whitechapel as its first production of the 2019-20 season.

Written by Joe Dickinson -- and co-directed by Rusk resident and CCT member Brittany Lankford and the Cherokeean Herald’s own publisher, and CCT board president, Josie Fox -- the show is a spine-tingling, laugh-out-loud historic “treatment of the serial killer who terrorized London in the 1800s,” according to the show’s synopsis as published on the CCT’s website. “Many of the characters and events are taken right from history, but others are pure comic invention, such as Pegeen MacDougal, a practictioner of white magic and her familiar Hogarth, who speaks only in cookbook terms.”

“It’s been great fun working with cast and crew on this interestingly historic play,” Fox said. “The neatest thing, I think, is the audience interaction – the audience will get to ‘solve’ the mystery of who is Jack the Ripper? So there could, conceivably be a different ending to this show every night! I think everyone’s going to have a blast trying to figure it out!”

All tickets are general seating, except for CCT members.

“Any patron who becomes a member of the Cherokee Civic Theatre gets discounts on tickets; gets the option to reserve the choicest seats for each show; gets special invites to attend the extra events we have, like our Raise the Roof concert series; and a whole lot more perks, too,” longtime CCT Board member Jerry Parker said. “It’s a great deal and makes a cool Christmas gift for a live-action amateur theater lover, too!”

Advance tickets for non-members are $13 for adults, $10 for students. At the door tickets are $15. Discounts for groups are available.

The Cherokee Civic Theatre, located at 157 W. Fifth St., just off the square in downtown Rusk, is an all-volunteer, non-profit organization that has been entertaining Cherokee County since 1972.

“The mission of the Cherokee Civic Theatre is to afford opportunities for cultural and artistic enrichment in East Texas by providing a venue for local talent to produce live theatre for the entertainment of diverse audiences,” the CCT’s website states. “Our goal is to educate both youth and adults in all aspects of the theater and to encourage volunteers to learn and showcase their skills, both on and off the stage.”