If you build it...Tomato Bowl nominated for state award 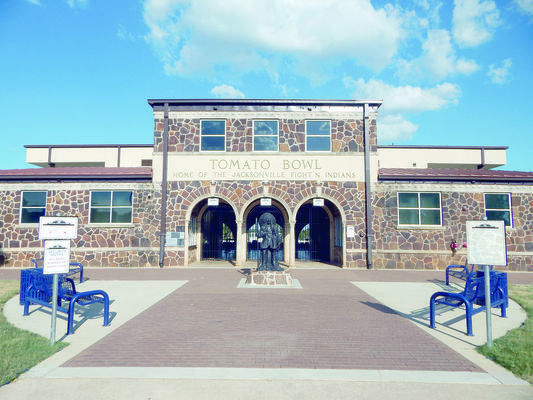 The restoration and redesign of Jacksonville’s historic Tomato Bowl is garnering state attention, as the arena has been named a finalist in the 2019 President’s Awards Program (PAP).

The Tomato Bowl is contending with Canton’s downtown park in the PAP’s Best Public Improvement Awards category for a city under 50K population. For more than 30 years the awards program, sponsored by the Texas Downtown Association (TDA), has recognized outstanding projects, places, and people of Texas downtowns.

“What an honor it is to have the Tomato Bowl recognized by the Texas Downtown Association,” Jacksonville ISD Public Relations Director Grace Traylor said. “We are absolutely thrilled with the outcome of this project. So much history has been preserved for our community, while providing Jacksonville ISD with a much needed state-of-the-art stadium. The renovation of our Tomato Bowl is important to Jacksonville, as well as the eight decades of tradition and pride associated with the stadium.”

The 80-year old stadium, constructed by the WPA Program in 1940, recently completed an entire interior reconstruction while leaving the iconic rock walls surrounding the stadium intact. The Tomato Bowl sits in the heart of downtown Jacksonville.

“The Tomato Bowl has a rich history and people, high school football fans from all over the state, know about the Tomato Bowl,” said Dick Stone, who served as mayor of Jacksonville during the time the renovations took place. “But it was nearly 80 years old and it was in dire need of a refurbishing. I’m glad that the school board decided to renovate versus tearing it down and building a new one somewhere else. I think it’s an icon of the community…It has a rich history, but it was old and antiquated. Now it’s been renovated and they did an incredible job. Originally, I had my doubts as to what it was going to look like and whether we’d be losing a piece of history, but it exceeded my expectations.”

TDA was established in 1985 to connect and serve communities that are committed to downtown vitality. The organization is an independent, statewide nonprofit that represents cities and towns of all sizes, economic development corporations, chambers of commerce, local associations, small businesses, and individuals.

One hundred and nineteen entries were submitted in 11 different categories from communities across the state. Due to the number of entries, the entries were divided up into two categories – Design and Achievement – with separate judging panels for each group.

Winners will be announced on Wednesday, Oct. 30, at the Awards Gala held in conjunction with the 2019 Texas Downtown Conference in Georgetown. Visit www.texasdowntown.org.