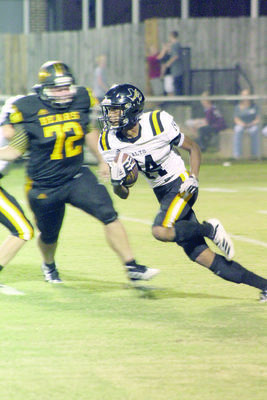 The mean sting of the Alto Yellowjackets was felt by the Timpson Bears at the John Herbert Eakin Stadium on Friday, Sept. 6. Alto shut out the Bears, 45-0, for their second non-conference win of the season.

The team improved on offensive yardage, both on the ground and through the air, for a total 374 yards.

Rushing yards accounted for 159 of the total. Passing yardage amounted to 215 yards, 157 better than last week.

West completed 11 out of 22 passes for a 50 percent completion rate on the night.

Atkins was the favored receiver of the night with five receptions, 75 yards and two touchdowns.

Todd Duplichain and Jackson Howell each had five tackles and one sack. Kolt Dement and Clayton Terry each added four tackles and a fumble recovery.

While Timpson managed 45 plays in the game, the Jacket defense held the Bears to only 91 total yards.

On a third down with 11 yards to go, West hit Warren on the right side of the field on a pass and run that resulted in a 33-yard touchdown, the only touchdown in the first quarter. With a successful kick from Julio Serrano, the Jackets created a 7-0 lead over Timpson.

With 6:47 remaining in the half, Skylar Atkins pulled in a pass on the left side, found room across the middle and made it into the end zone for a 12-yard touchdown. Another ball kicked through the uprights by Serrano gave the team 14 points on the scoreboard.

Another third down, with eight yards to go, and West faked the handoff, rolled right and hit Isaac Weatherford for a 20-yard pass that placed the Jackets in scoring position. An aerial to a wide-open Aaron Skinner in the end zone for a five-yard pass added another six points for Alto.

A pass from West to Atkins, with under a minute in the half, resulted in a 47-yard touchdown and a 26-0 halftime score.

In their opening possession of the second half, Atkins advanced the ball 37 yards to put the Jackets inside the red zone. Steadily working towards the end zone, West crossed the goal line on the quarterback sneak from a yard out. This was the only third period score and it increased Alto’s lead to 32-0 over Timpson.

Less than two minutes into the final frame, Vi’Darious High crossed the goal line on a seven-yard run. A successful PAT from Serrano brought the score to 39-0.

The Bears went three and out, punting the ball to the Alto 48-yard line. Stepping in for West, sophomore Will Dixon handed off to Jer’Darious Bolton for a two-yard gain. A 31-yard pass to Matthew Randall put Alto just inside the red zone on the Timpson 19-yard line. A handoff to Bolton resulted in a short gain, but a second attempt and Bolton was across the goal line. With 4:39 remaining on the clock, the touchdown by Bolton would be the last for the night, giving Alto the shutout win, 45-0.

The Yellowjackets (2-0) will host the New Diana Eagles (2-0) Friday, Sept. 13. The game against the Eagles will serve as the homecoming game for Alto.