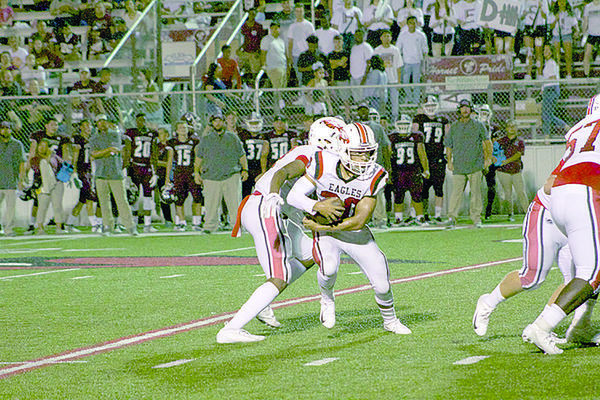 Photo courtesy of Tara Tatarski
Alex Jones (pictured) receives a handoff during Friday’s game against at Athens. Jones had a four-yard rushing touchdown against the Bears.

The Rusk Eagles traveled to Bruce Field in Athens looking for their first win of the young season. Despite their efforts, the Eagles fell to the Hornets, 16-28.

Eagles quarterback Jaylon Hall added 116 yards to the offense for the night, 76 passing and 40 rushing.

Rusk received the opening kickoff, driving 67 yards in 10 plays. The Eagles’ efforts were capped by a four-yard run into the end zone with approximately 7:00 remaining in the period. An aerial from Hall to Joseph McGowan and the two-point conversion was complete, giving Rusk the 8-0 lead over Athens.

The Hornets took possession on their own 32-yard line following the kickoff by Rusk. Using about as much time as Rusk had, the Hornets ate up ground and scored on a 20-yard rush. The extra point kick was good, but Rusk still held a single point lead at the end of the first period, 8-7.

Entering the second quarter, Rusk was forced to punt. Athens took possession on their own 37. Taking approximately two minutes off the clock, Athens scored on an 18-yard rush. With a successful point-after attempt, the Hornets took the 14-8 lead over the Eagles.

A scoring opportunity opened up for the Eagles late in the second quarter when McGowan recovered a muffed punt, setting up the Eagles just 21 yards from the goal. Rusk advanced to first and goal from the 10-yard line, but failed to take advantage of the opportunity presented.

The Eagles kicked off to the Hornets to open the second half. Rusk caught a break when a holding penalty recalled a 74-yard Athens touchdown, but the Hornets went to work to earn it back. Following a series of plays that cut about five minutes from the game clock, a 23-yard rush got the Hornets across the goal line. With the Athens kicker putting the ball through the uprights, the Hornets took the third-quarter lead, 21-8.

Jaden Rushing returned the kickoff 53 yards to give the Eagles possession on the Athens 22-yard line. Four plays later and Hall carried the ball into the end zone on a one-yard run. He then hit Sean Rogers for another successful two-point conversion, closing the gap. The score at the end of the third frame was 21-16.

In the final quarter, the Athens Hornets completed a 95-yard scoring drive that ticked off more than nine minutes from the clock. With the touchdown and another successful PAT, Athens sealed the fate of the Eagles and took the 28-16 win.

Michael Hannigan contributed to this article.